Hike the unforgettable Lava River Cave with your kids

Once in a while, we go on a hike that is so different, so intrinsically unique, that we rave about it for weeks and we know it’s a hike we’ll always remember.  The Lava River Cave in Oregon is such a hike.  It’s been on our to-do list for years, and we finally made the trip to central Oregon.  It is well worth the drive to hike the Lava River Cave with kids.

The entrance is hidden from view at first. You descend into a dip in the ground, and you feel the cold air before you see the entrance. And then, it’s there, and down, down, down you go.

The History of the Lava Tube Cave

The Lava River Cave, located between La Pine and Bend on Highway 97, is technically a “lava tube”, formed by flowing basalt from a volcano that erupted 80,000 years ago.  Lava flowed downhill and formed a channel.  As the lava flowed, the top layer cooled and solidified, forming a crust over the top of the molten lava.  As the eruption ended, the lava drained out of the tube, leaving an underground tunnel behind.  Over time, the roof eroded and collapsed in a portion, revealing the mile-long cave we see today.

A hunter name Leander Dillman “discovered” the cave in 1889, but obsidian flakes nearby suggest that native tribes knew about the cave long before.  The cave was originally called Dillman Cave, but was renamed officially in 1923 during a geology study of the cave.  Three years later in 1926, the Shevlin-Hixon Lumber Company donated property around the cave entrance for it to become a state park.  In 1981, it became part of the national parks system, managed by the Forest Service. 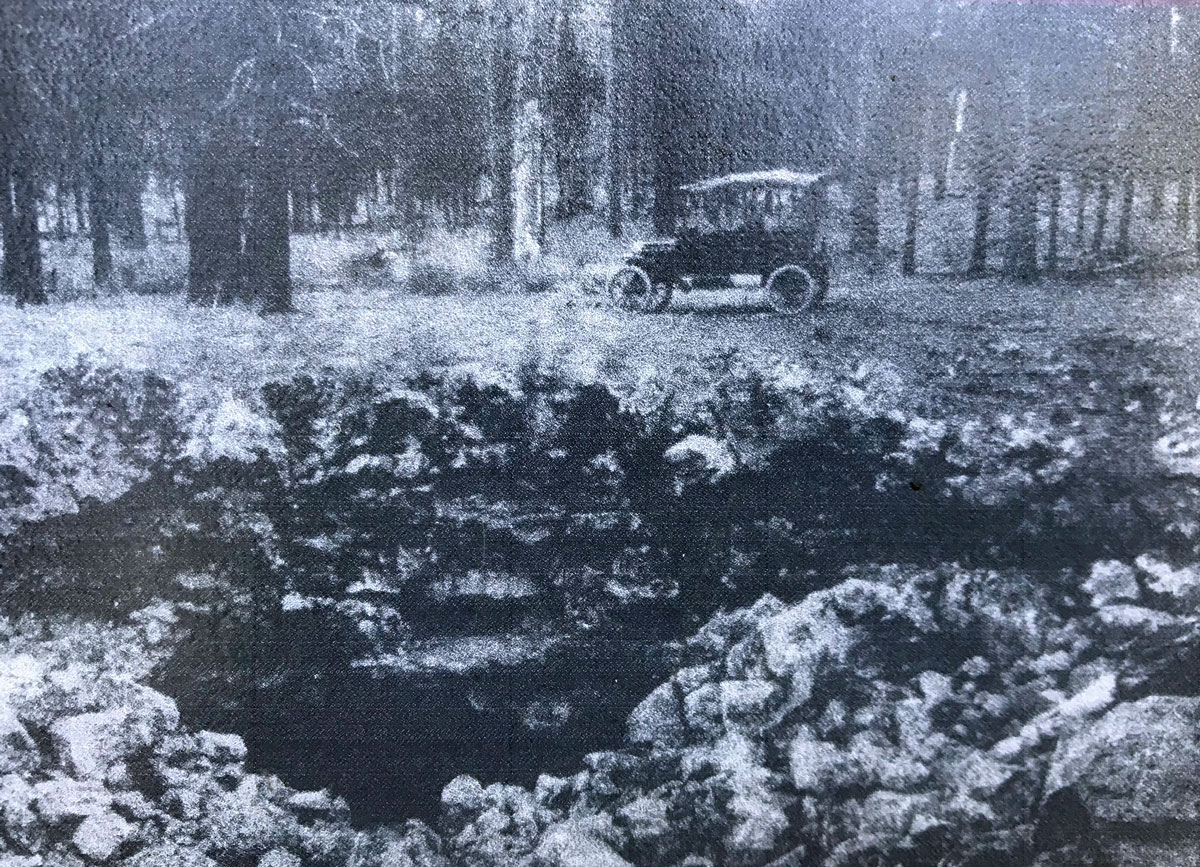 This undated photo is on an interpretive sign at the Lava River Cave entrance. It looks far more developed now, with a parking lot, bathrooms, and a tiny gift shop. Not to mention a safety fence!  (photographer unknown)

How to prepare for hiking the Lava River Cave

The cave is a cool (okay, cold) 42°F year round.  Once inside the cave, there are no lights, bathrooms, or water access. 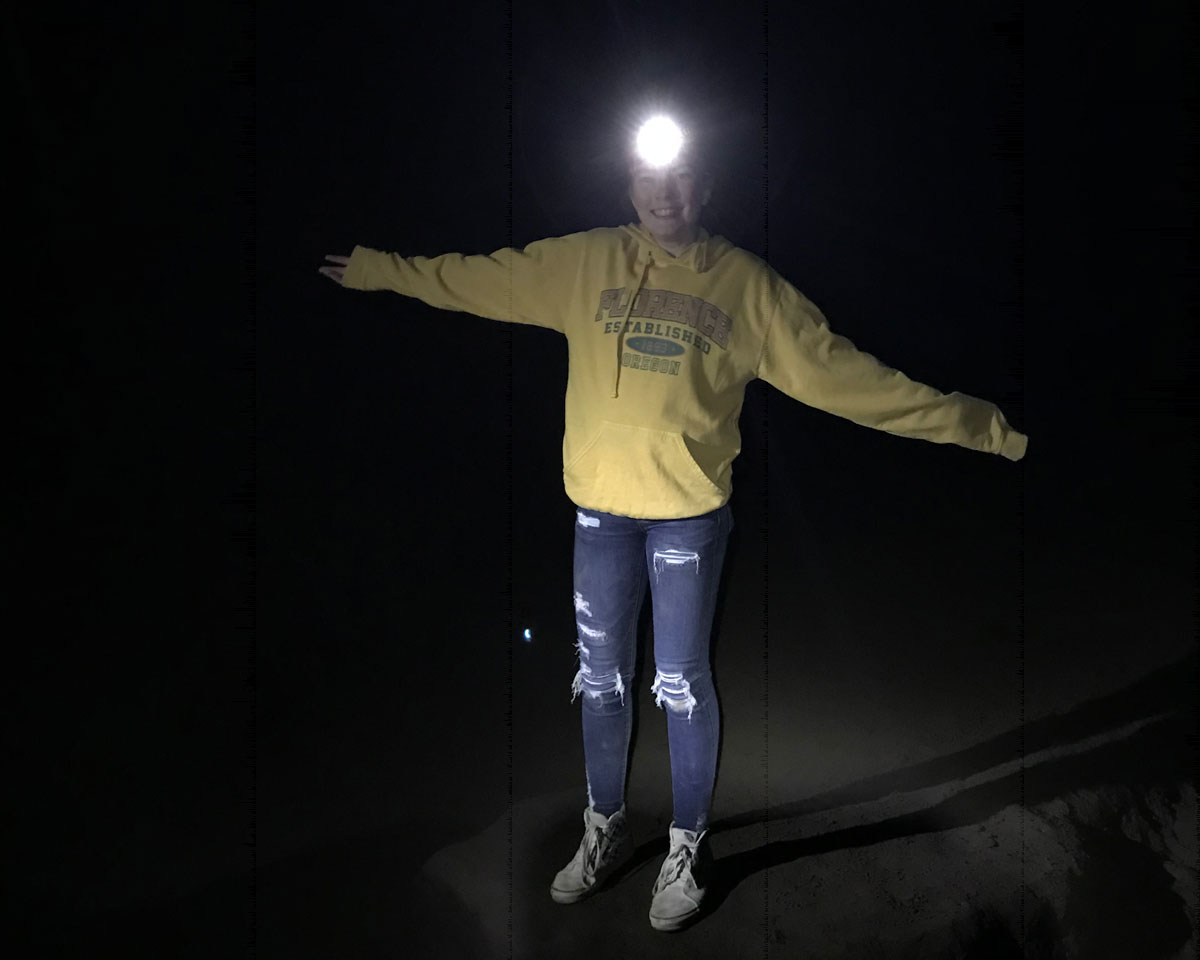 Our headlamps left our hands free, but we still could see the path pretty well.

After a short orientation by rangers outside, you’re free to head down the paved path to the cave entrance.  The temperature drops as you approach, and it feels heavenly on a hot summer day. 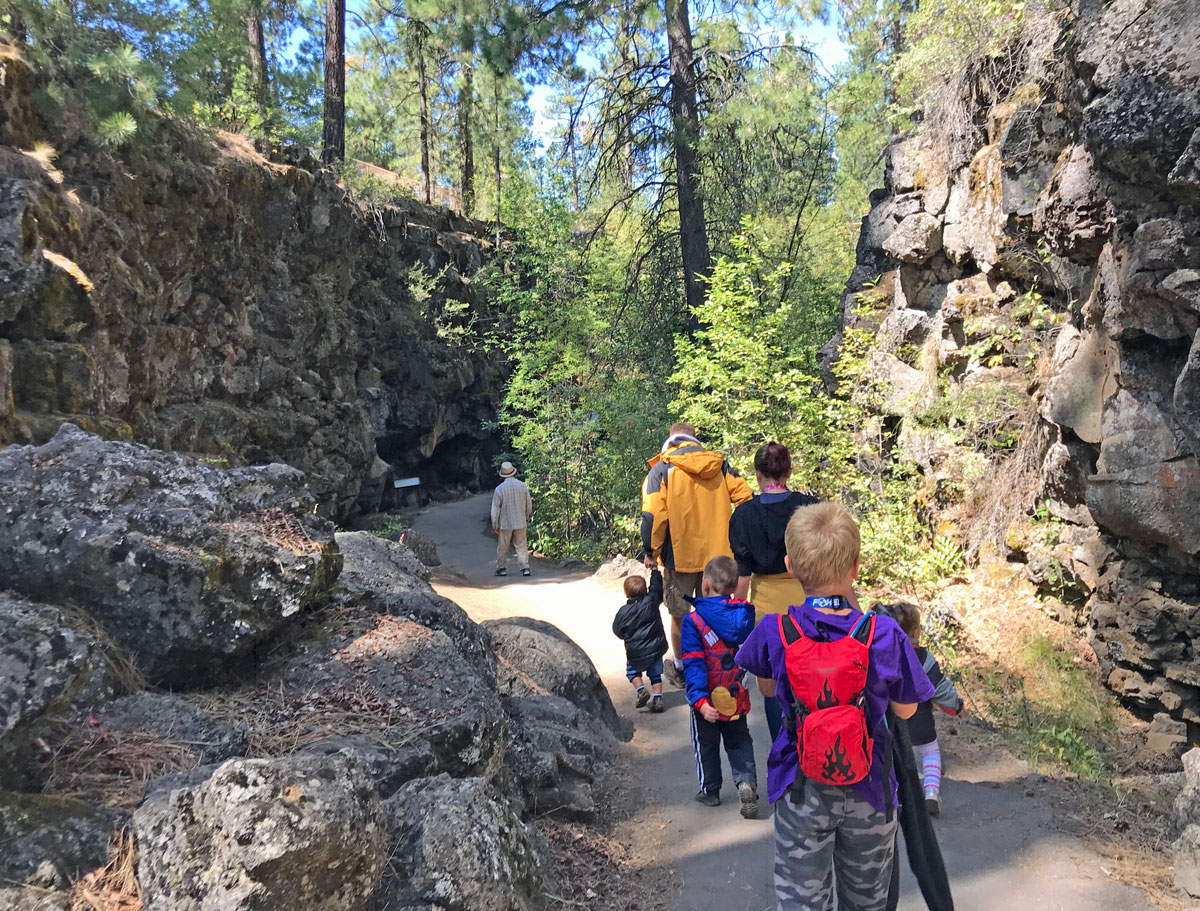 Approaching the entrance. This portion of the trail is wheelchair accessible, but wheelchairs can’t enter the cave itself. There are benches and interpretive signs along this path.

The paved path ends in a flight of stairs. Down, down, down you go.

There are more stairs than I could count.  Hand railings are on both sides, and the steps are studded metal so they aren’t slippery.  We stopped to put coats on the little ones before we lost our light. 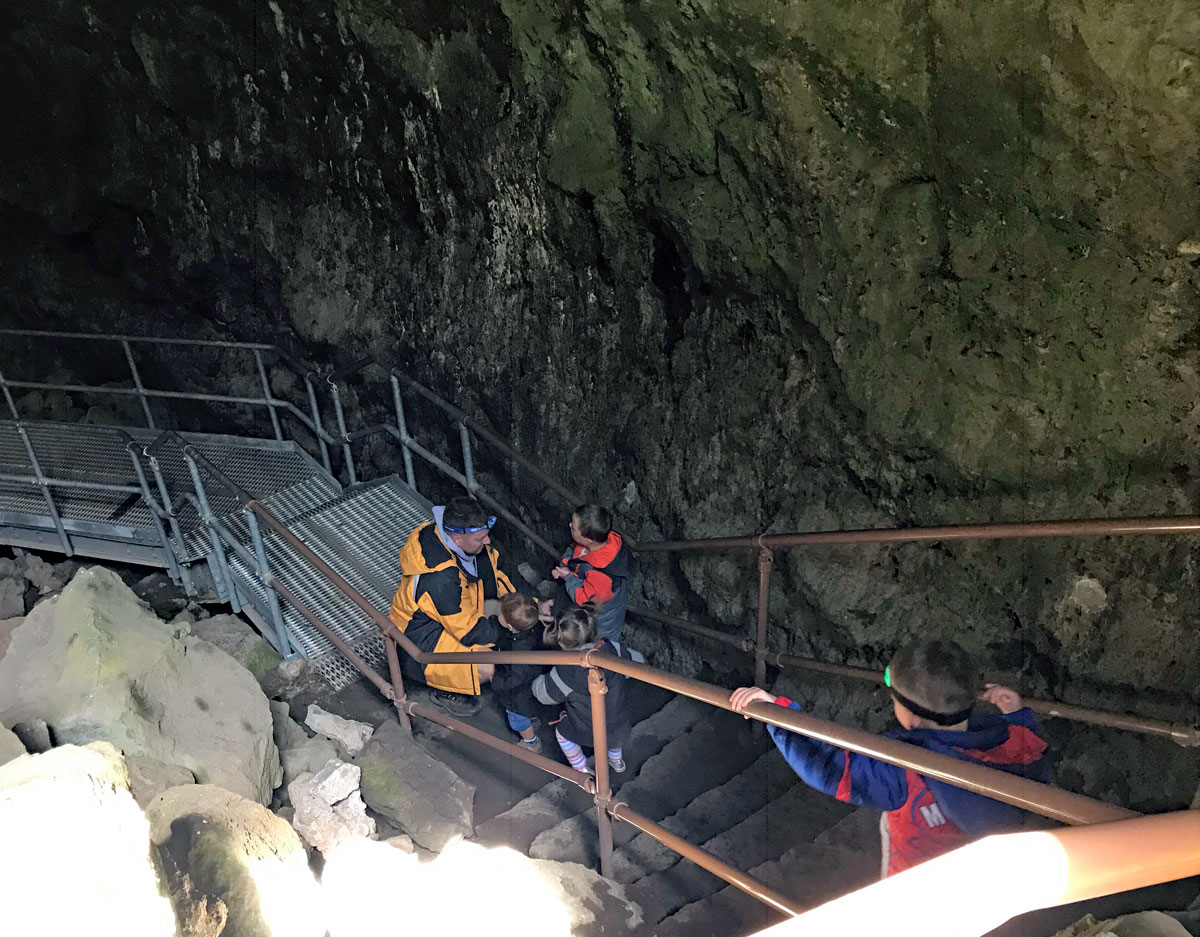 Our kids handled the stairs just fine, even our two who have slight mobility limitations. We went slowly and marveled at the depth of the cave as we descended.

Remembering that its perfectly dark, there is no light at all except what you bring with you, take time to look around.  The cave walls, ceiling, and floor change throughout the length of the cave.  We often stopped to shine our lights around, and marveled at the geology of the cave.  Look and enjoy, but don’t touch!  The oils from our hands can disrupt years of cave formations, and indeed, some have been damaged within the Lava River Cave. 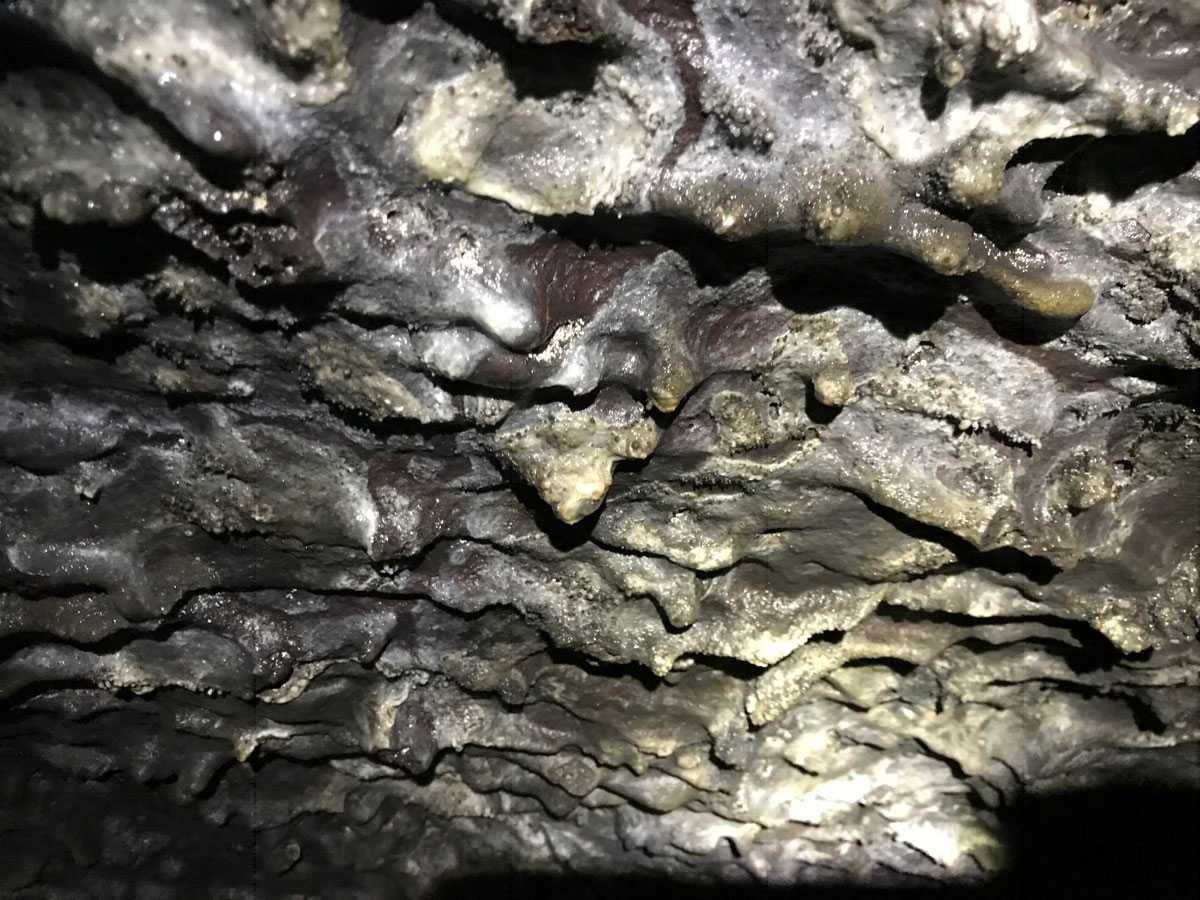 The roof of the cave often shows the birthing of stalactites. 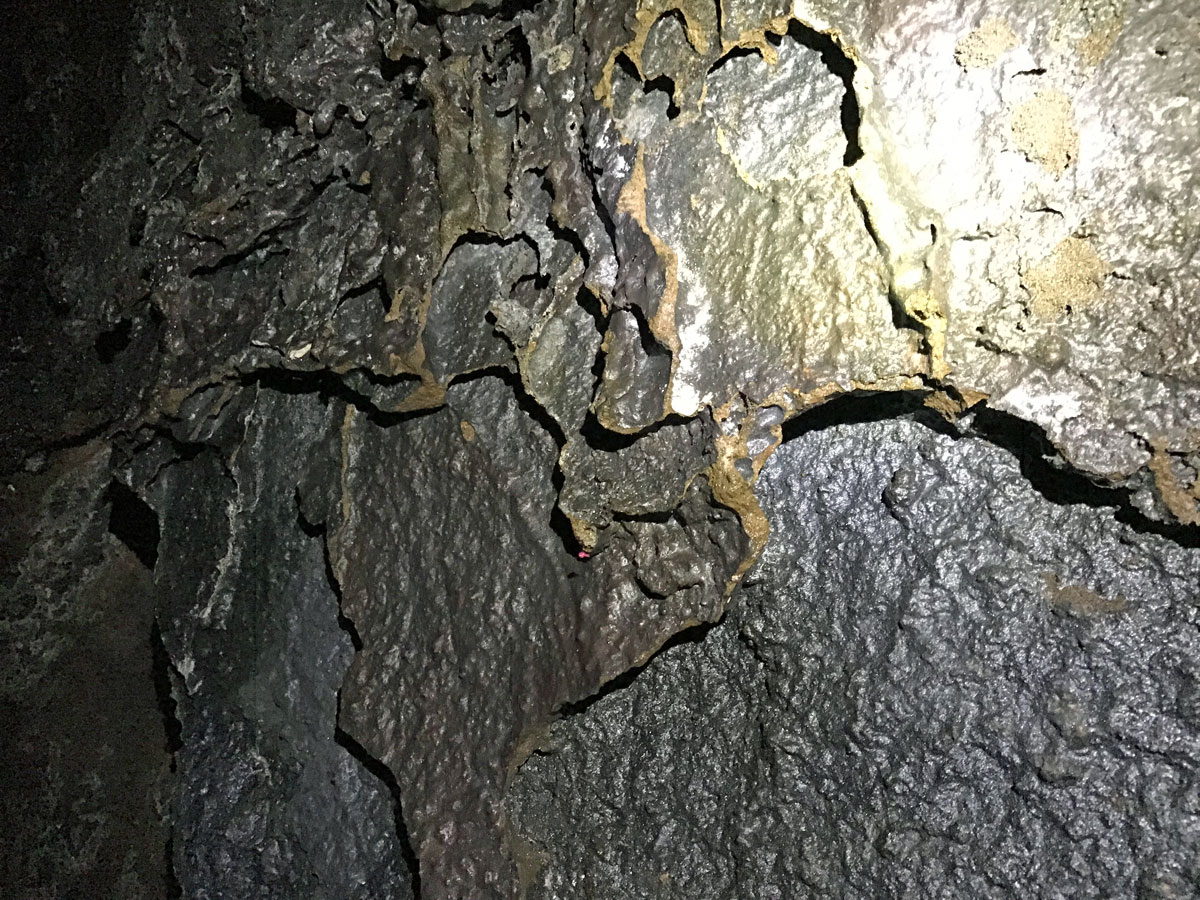 The walls of the cave revealed unique formations and layers of rock left by millennia of geographic changes.

The floor of Lava River Cave changes the most notably.  From large rocks to gravel to sand, the floor terrain changes often.  Much of the hiking is easy, but some does require good balance and close attention.  Other parts are trickier, so step carefully and be prepared to help your kids. 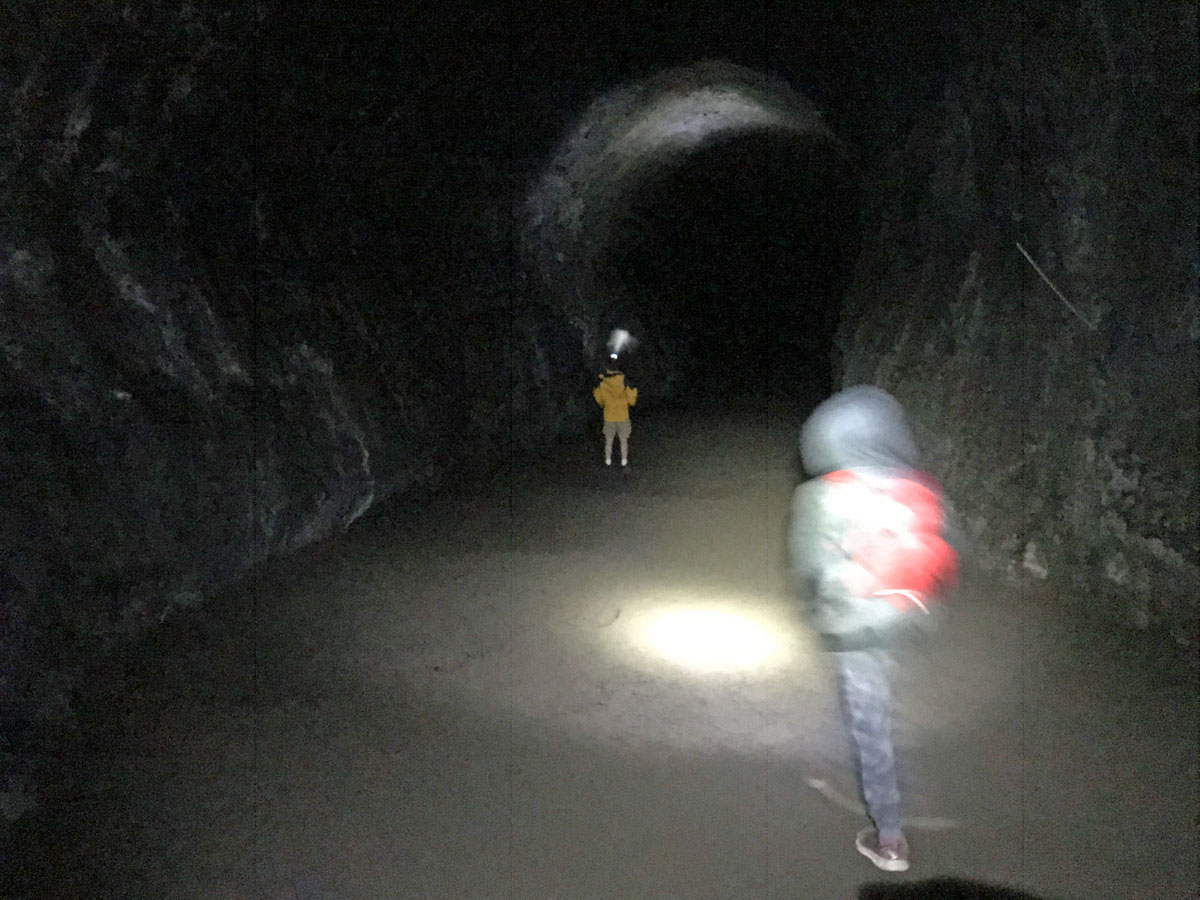 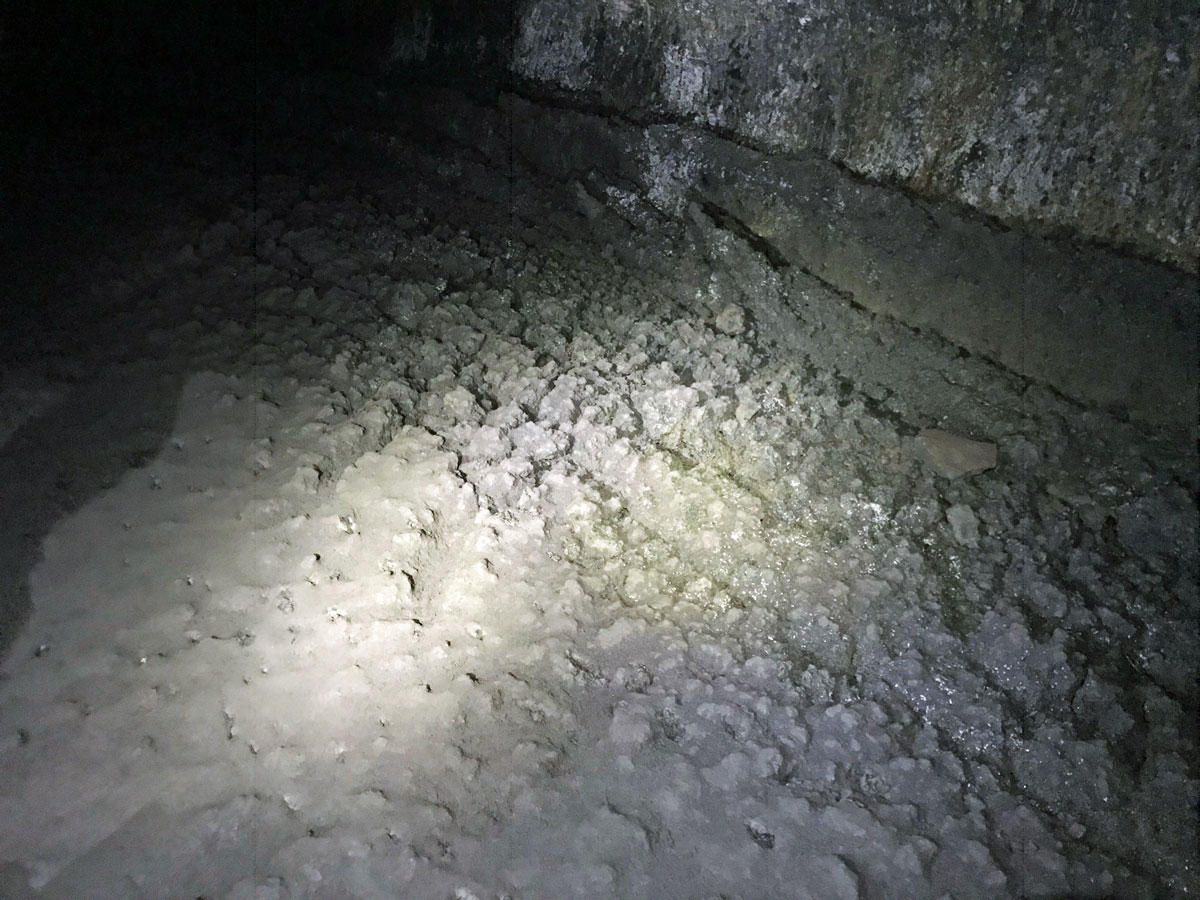 The sandy floor is as hard as rock in places, but gets carved into interesting shapes and textures by water that drips through the ceiling. 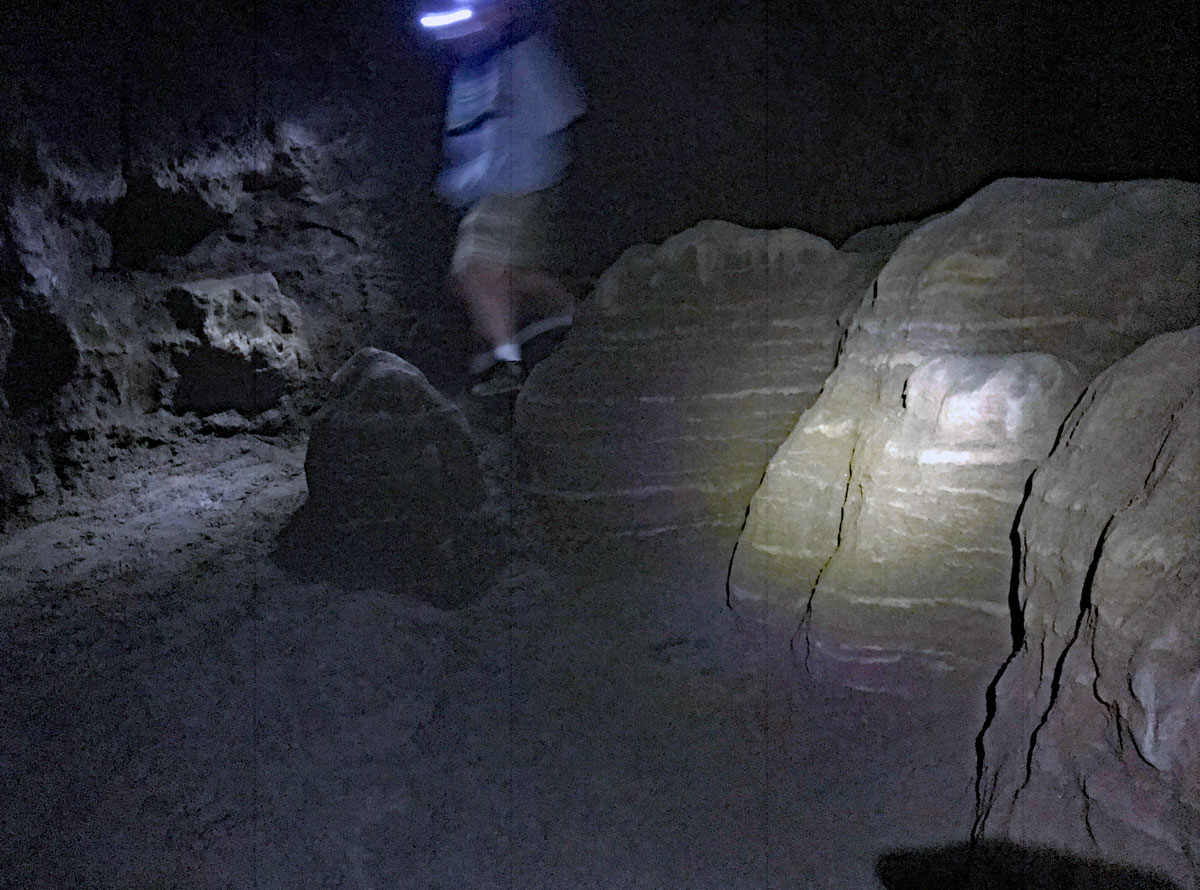 Most of the cave floor is sandy or solid rock, but occasionally there are formations. I thought the layers that were visible were interesting.

Things to see inside the Lava River Cave

About 1/10 mile into the cave you’ll enter a broad cavern.  The ceilings are 31′ high (and 50′ thick!).  There is a bench here right under Highway 97!  They say you can sometimes hear traffic above if you are very, very quiet.  Our family doesn’t ever really achieve “quiet”, though, so we couldn’t hear anything. 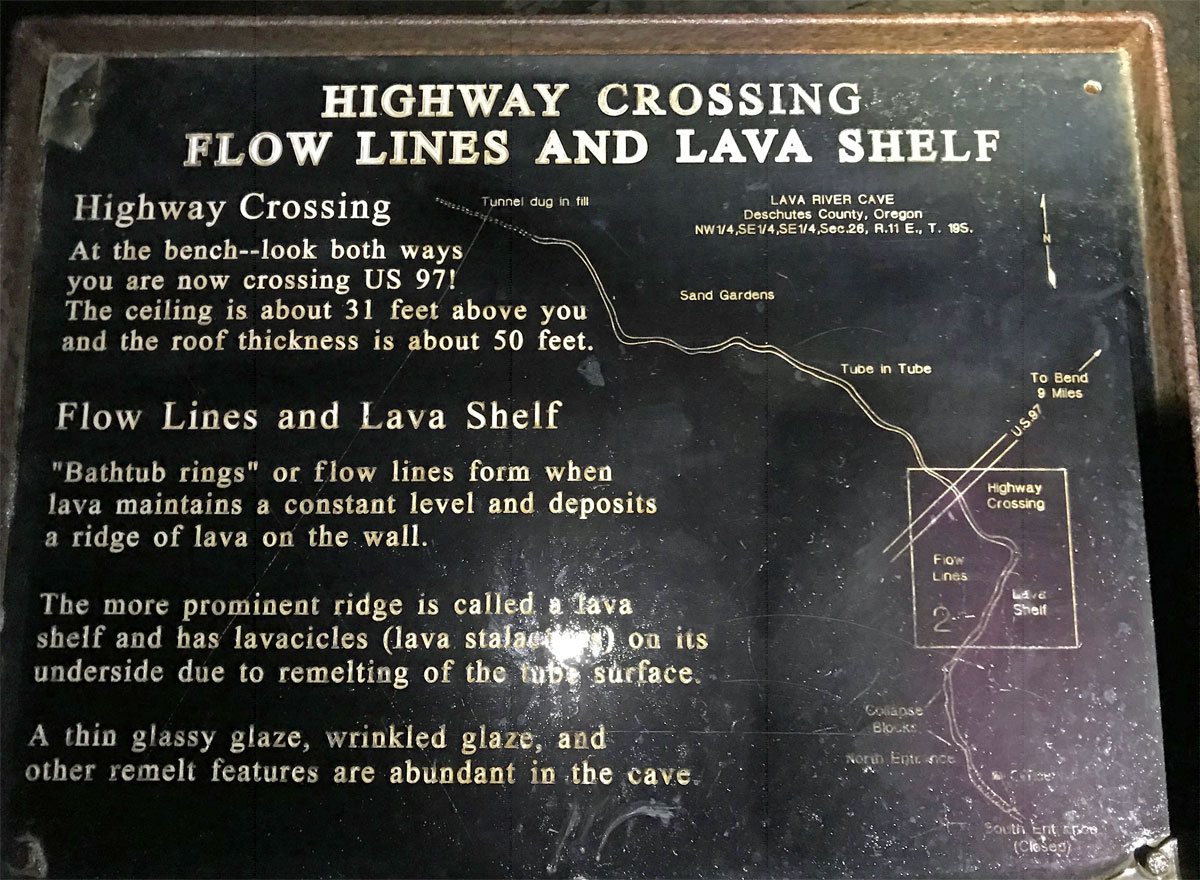 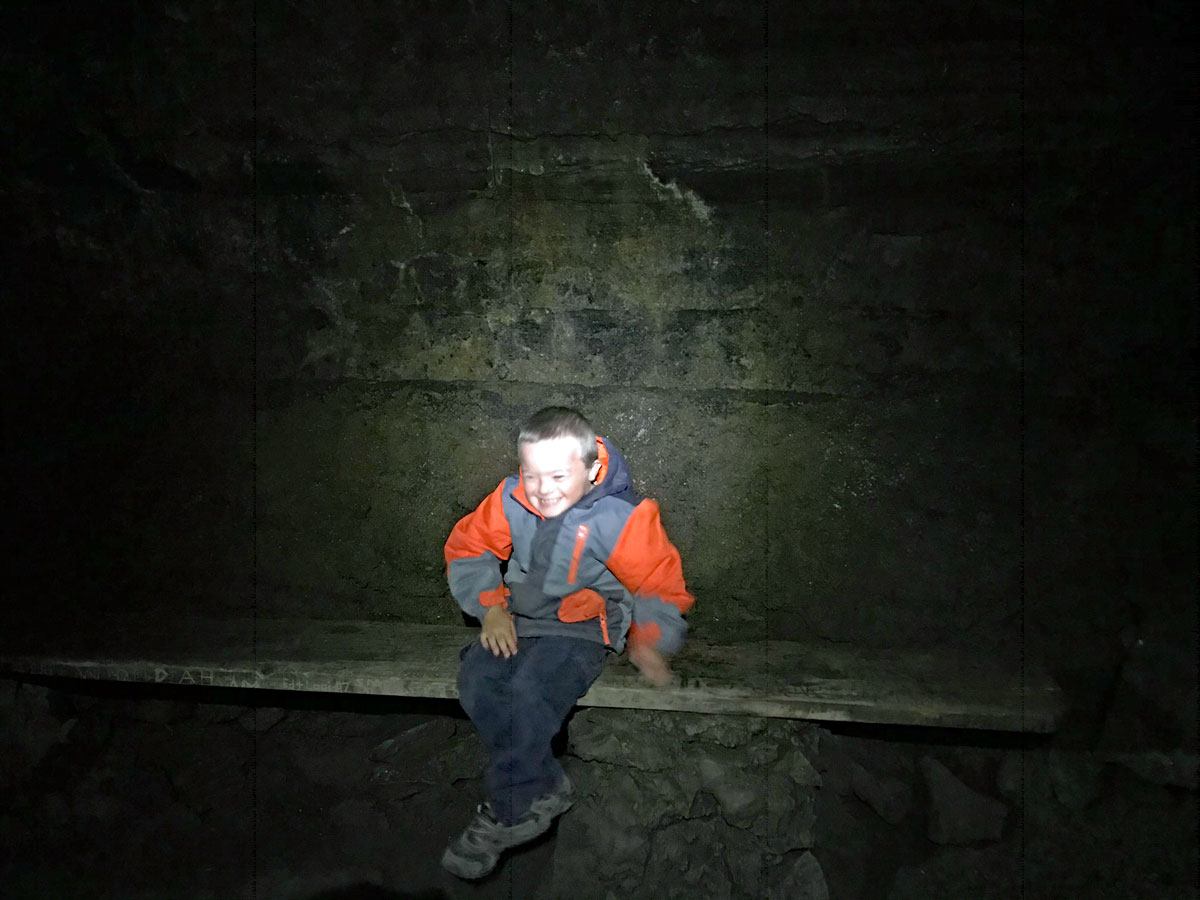 This bench is directly underneath Highway 97. Sit a moment in silence, and listen for cars above.

Most of the cave has high ceilings, but one portion is only about 5′ high, requiring most adults to stoop a bit.  This part of the cave formed when hot gasses trapped within the tube caused the walls to melt again.  This is also a great place to see baby stalactites, as in our photo above.  Hilariously, our kids stooped too, even the ones who didn’t come close to hitting their heads. 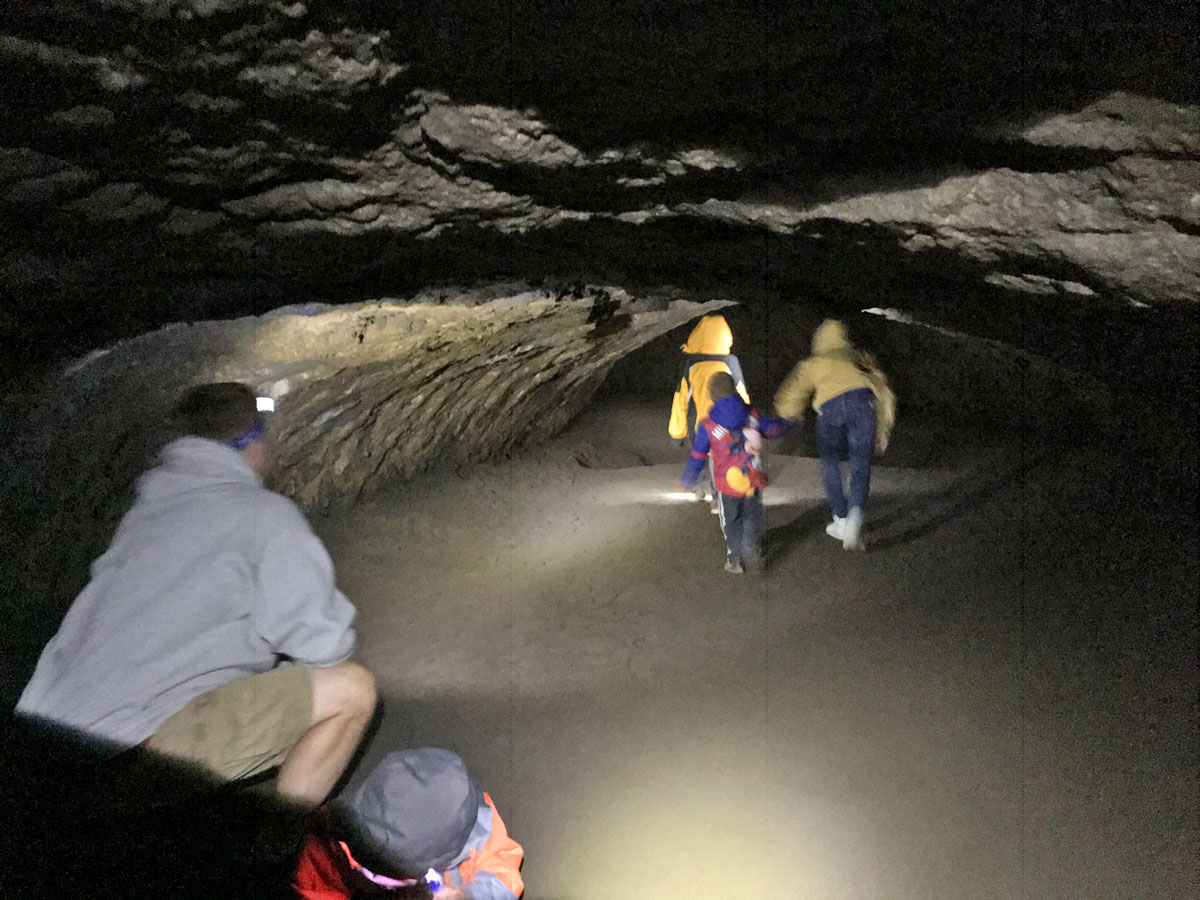 The cave is never “tight”. Usually wide open with high ceilings, there is one short stretch with a low ceiling.

About 3000 feet into the cave (just over halfway), you’ll encounter a fenced portion with a path going around.  Signs describe a garden of sand spires, created when dripping water carved the sandy floor into sculptures.  These sculptures have been heavily damaged by decades of human contact, and they are now protected in the hopes of letting them develop again. 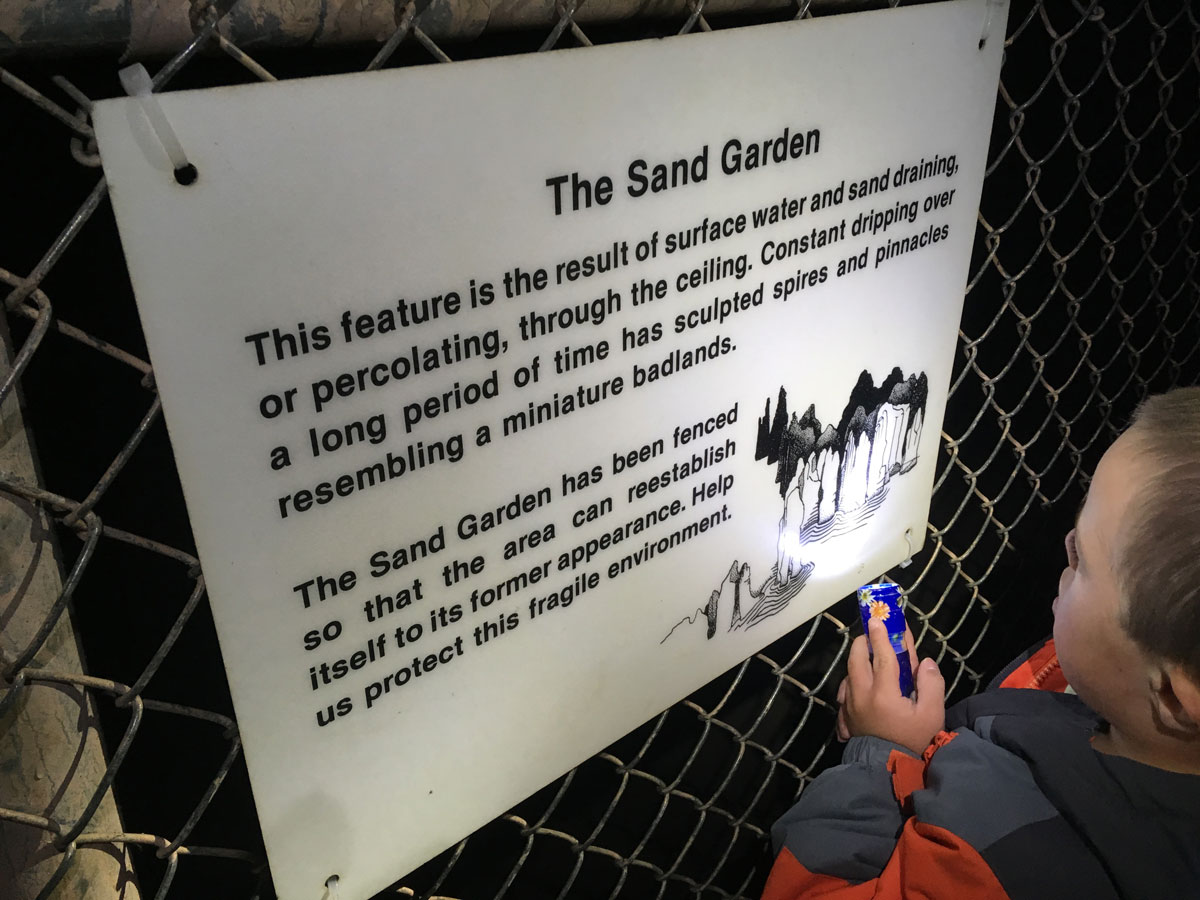 My son examines the interpretive sign for the Sand Garden. We navigated around the fencing, trying unsuccessfully to get photos of what was inside. 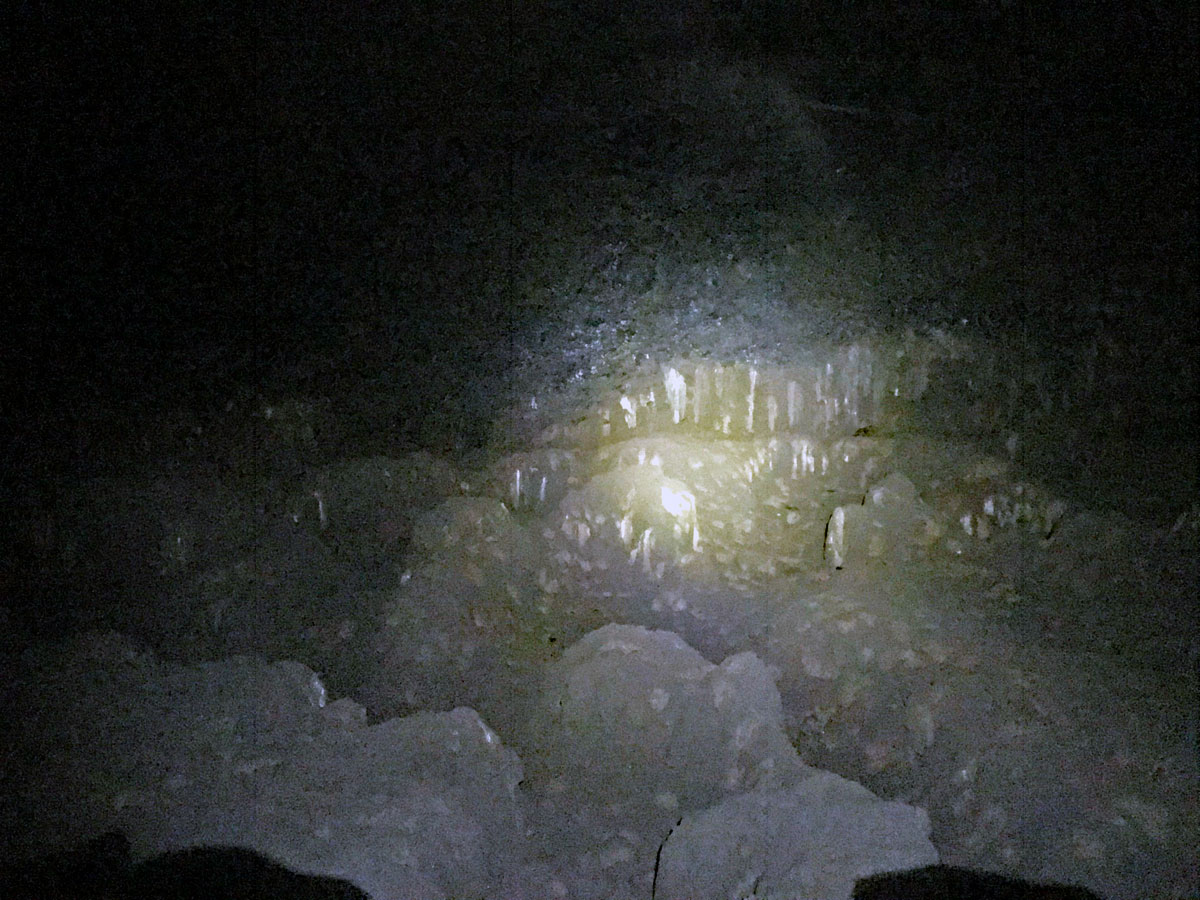 My (very poorly lit) photo of the Sand Garden. You can see, it’s not very impressive now. Decades of people touching the spires have worn them down to insignificant nubs. I do hope that protecting them will bring them back. 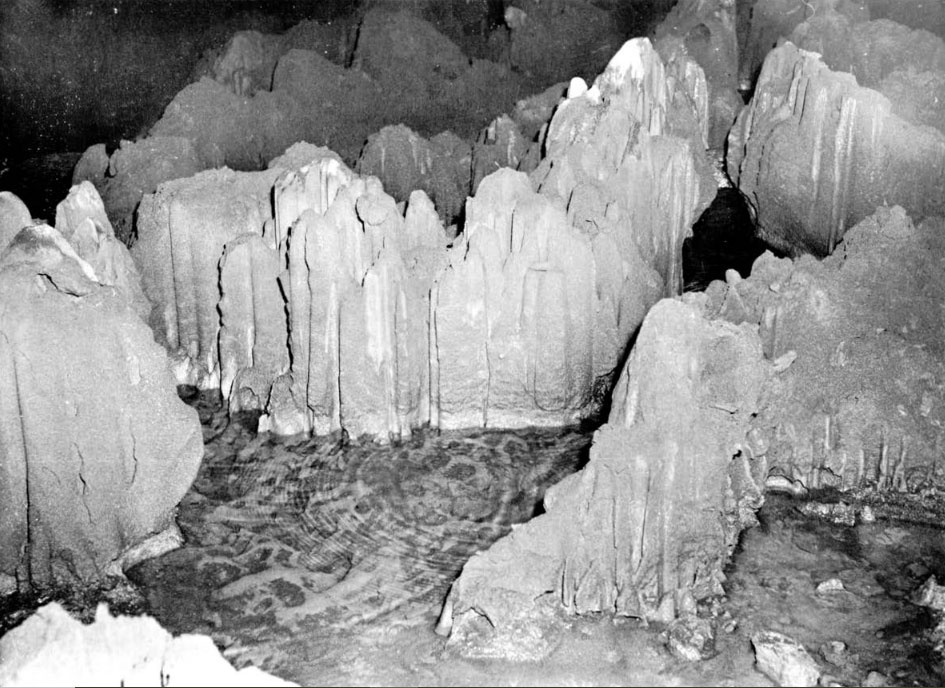 This historical photo of the Sand Garden shows what they looked like in the mid 1960s. (Photo by Oregon State Highway Department, undated, photographer unknown)1

Where does the cave go?

Lava River Cave slopes downhill gradually.  As you travel toward the end of the cave, the cave bottom becomes sandier and sandier.  Thousands of years of water have percolated downward from the surface to the cave, carrying sand with it.  The water drains away and the sand remains.

Finally the cave dead ends as the sand fills in to nearly the ceiling.  There have been attempts to dig it out and see how far it goes.  Speculation suggests the cave could extend much further, but is simply clogged with sand.  As we approached the end, a couple of hikers came up behind us and offered to take a family photo.  We returned the favor and headed back the way we came. 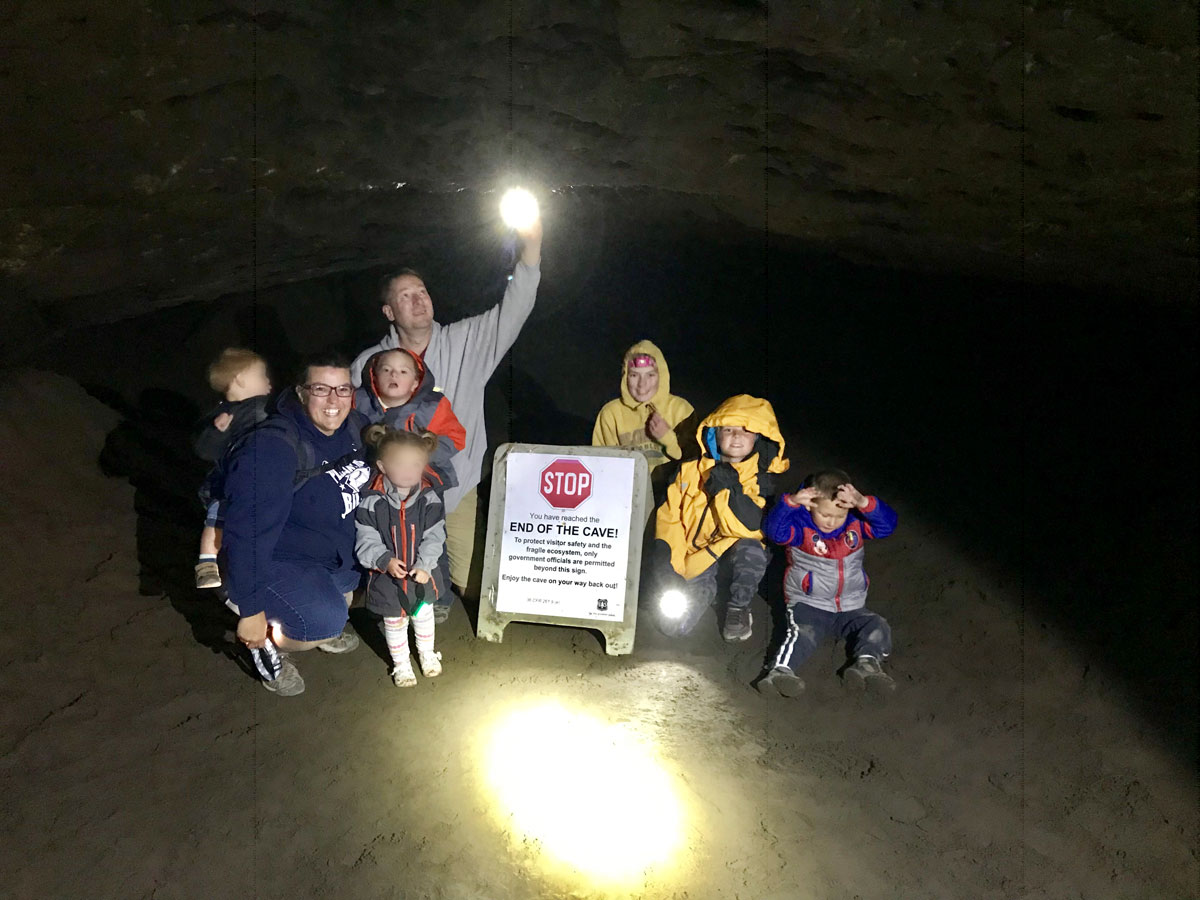 Back to the Light

We hiked back out of the cave, the return mile much faster than the first time through.  We met lots of people heading down.  After being in complete darkness, other than our own lights, for over an hour, it was kind of nice to meet other people. In fact, in a totally ironic coincidence, we ran into our next door neighbors.

And sweet victory when we saw sunlight streaming down from the entrance!  We still had a lot of steps to climb to get back out, but the burning calves were worth it! 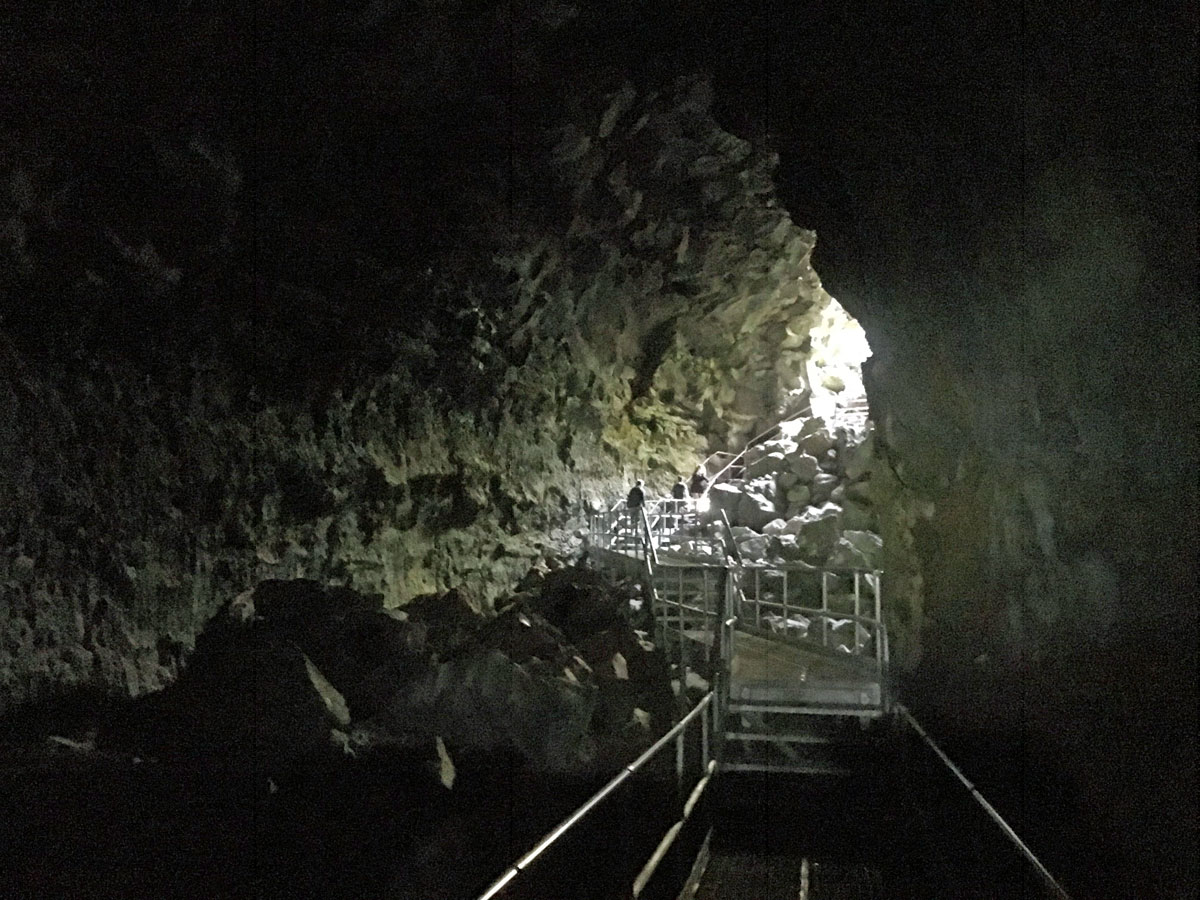 Heading out into the sweet, sweet sunshine! I never really appreciate sunlight and warmth until I’ve spent some time deep underground. 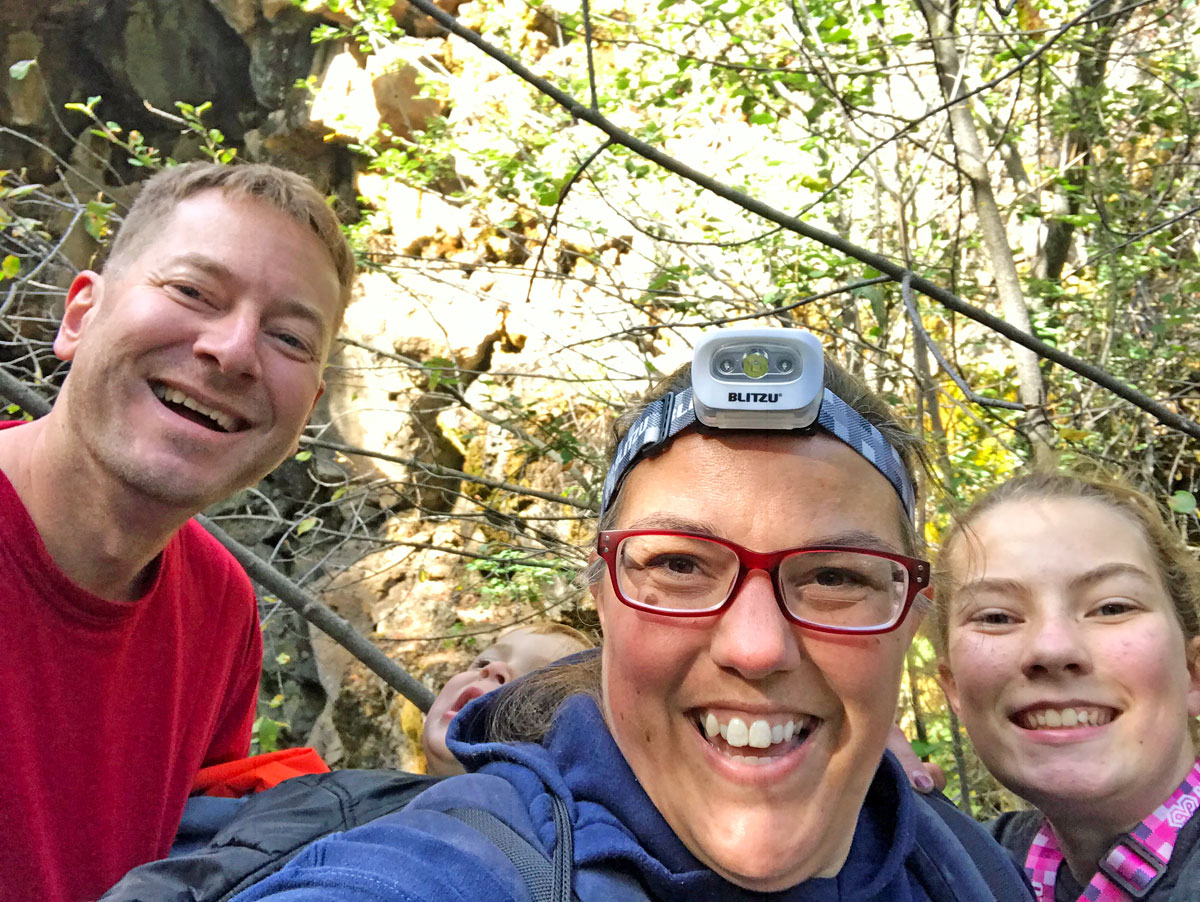 Back outside! And boy, was it HOT! The summer heat felt amazing after the constant cold of the cave, but we’d just climbed dozens of steps up in full winter coats. We could hardly wait to get out of our coats and breathe in the warm summer sunshine.

If you go, and I hope that you do, here are the nitty gritty details:

Access: the cave is not accessible for wheelchairs or strollers.
Gear to consider:

We didn’t get enough of our own video footage for a video, but here’s a really nice one from Matt Cook Oregon that shows the floor of the cave and many of the features I’ve described. 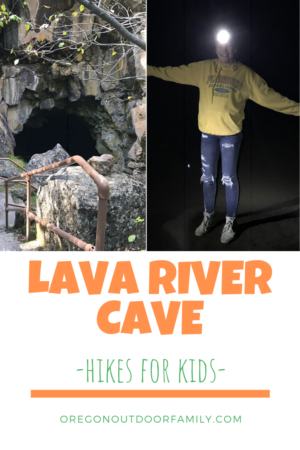 An ode to hiking shoes

9 Mistakes We’ve Made While Hiking with Kids

Crack in the Ground hike delivers a deep...

Day Hiking Gear for Families – What to...

Explore the Incredible Marble Halls of the Oregon...

Ape Cave and the Trail of Two Forests...