We’ve fallen in love with renting Forest Service cabins…old guard shacks and lookouts that are no longer used in an official capacity and are now in their Recreational Rental program.  Most of the cabins are very rustic, often very remote, and almost completely without amenities.  But there’s a certain charm to them that makes staying in one a lot of fun.

You can reserve a cabin via Recreation.gov six months in advance.  In February, I started eyeballing dates and researching cabins and lookouts.  We liked the look of Timber Butte Lookout and it was close to home.  I picked out dates and one morning in March, I woke up early and got ready to score our reservation as soon as it was posted.

Timber Butte Lookout is located high in the Cascades at about 3600′ elevation on the edge of the Willamette Valley near the Fall Creek area.  Located on a ridge top, it promised sweeping views, gorgeous sunrises, and more stars than you can count.

When it was our day to travel, I called the Forest Service to get the gate combo.  This is important, because once you’re standing at the gate, it’s too late.  No cell service at the gate.  We followed the driving directions and arrived with no trouble at the gate.  I tried the combination on the lock…nothing.  Uh oh.  My husband tried.  The kids tried.  I tried again.  Nothing.  There’s a path around the gate where people have obviously driven.  I eyeballed our minivan, skeptical, but really it was the only hope.  Hope that as we reached the ridge top, maybe we’d have cell service and could call.  And if not, then at least we’d be in, right?  My husband drove the van while I navigated him over the rough terrain.  The bottom of our van scraped terribly, but we made it over and started up the (very) steep hill to the cabin as our tires spun in the gravel.  After 1/4 mile, we reached an opening in the trees, high above the surrounding hills.  And voila, 2 bars of service.  Called the Forest Service.  Oh, you’re at Timber BUTTE.  New combination in hand, we head back down to the gate to let in our car, which had no hope of making it around the gate.  Whew.

From the gate to the cabin is one mile and it’s very steep at times.  The Forest Service recommends a high clearance vehicle.  We have a minivan and a sedan.  So we took them both up and hoped for the best.  They didn’t disappoint, we arrived at the parking area in no time.

From here, the cabin is still invisible.  There’s a trail, though, and just a few feet into the forest you’ll get your first glimpses of the cabin.  It’s about 300 feet uphill.  Your kids will run up the hill, but you, hefting water, sleeping bags, and babies, will be huffing and puffing by the time you get to the top.  It’s the elevation, of course.  But the view at the top is well worth the effort. 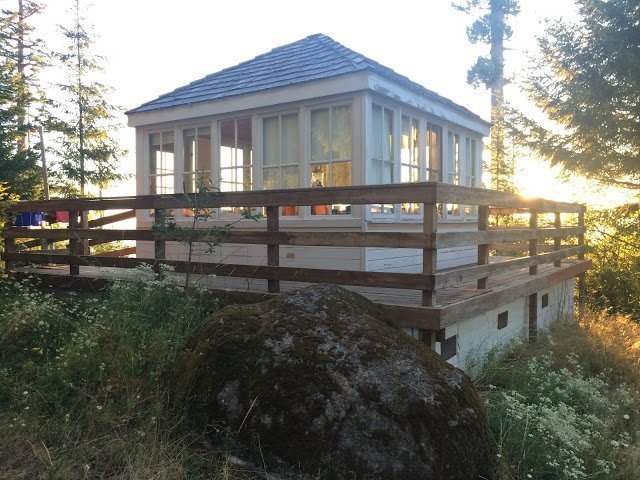 Inside, the cabin is charming and bright.  Windows surround the cabin–it is a lookout, after all–and a cast iron stove is a guarantee that you won’t be cold at night. 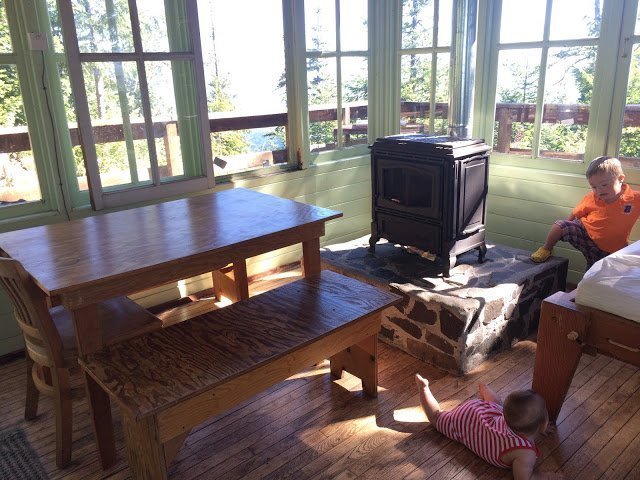 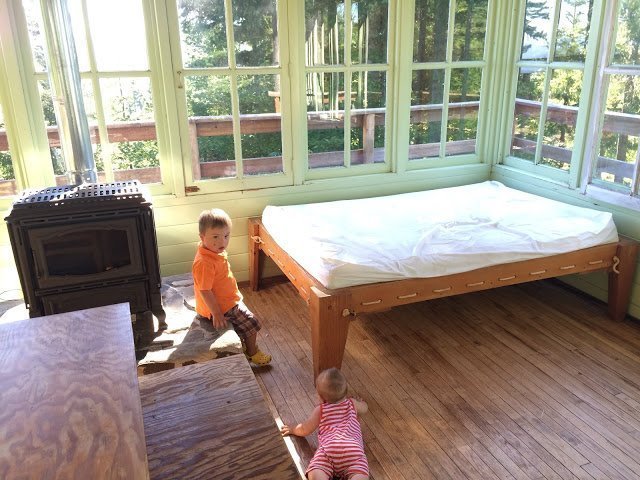 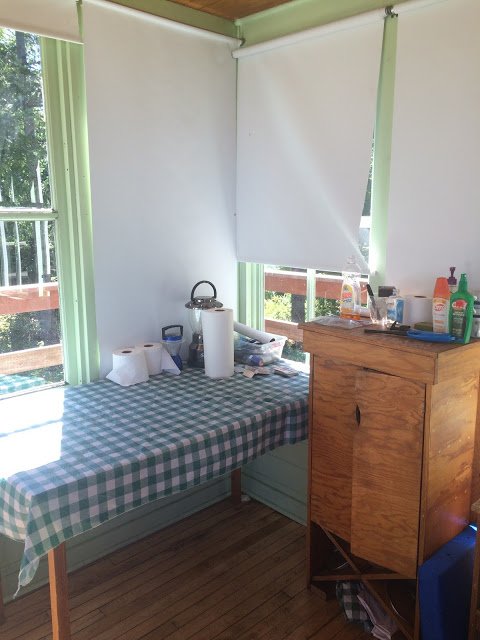 You’ll be pleasantly surprised to find a lot of basic provisions…pots and pans, cutlery, plates, bowls, mugs, a teapot, etc.   Honestly, you don’t need to take your own and lug them to the top.  The Forest Service, and probably other campers, have done it for you.  There was also plenty of bug spray, matches, lighters, and battery-operated candles (real candles are not allowed). 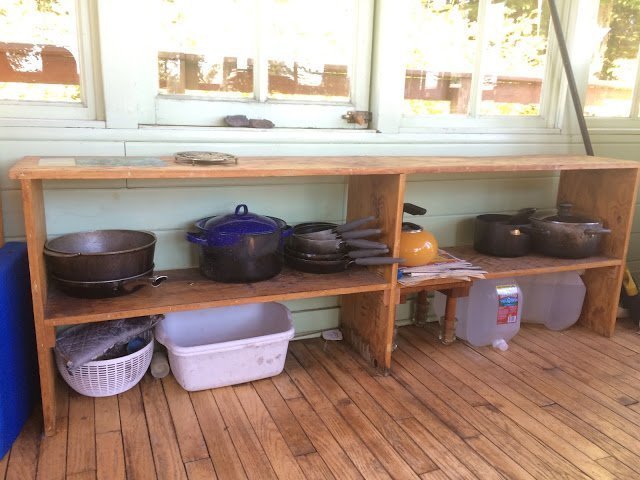 Outside, you’ll find another super awesome feature: a propane cookstove.  I was absolutely delighted to find this.  I can, and do, cook over a fire, but it’s so much easier on a stove. 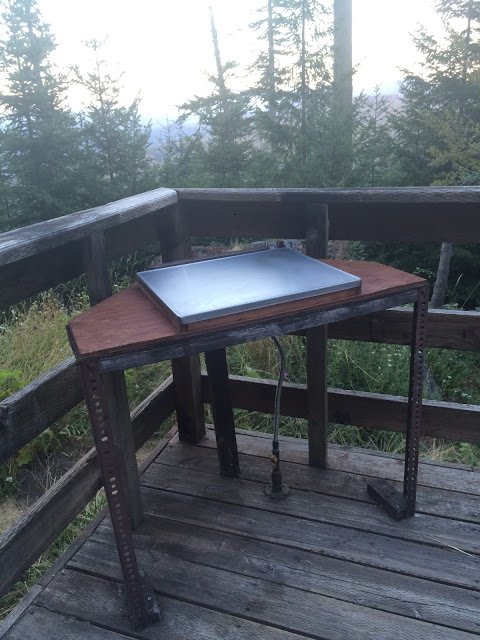 But if you really LOVE cooking over a fire, explore just a little and you’ll find a fire ring and picnic table.

If the bugs are getting to you, head inside and pick up the decks of cards.  We found 3 decks and each had all the cards!  My husband taught our kids to play Hill and they spent several hours playing. 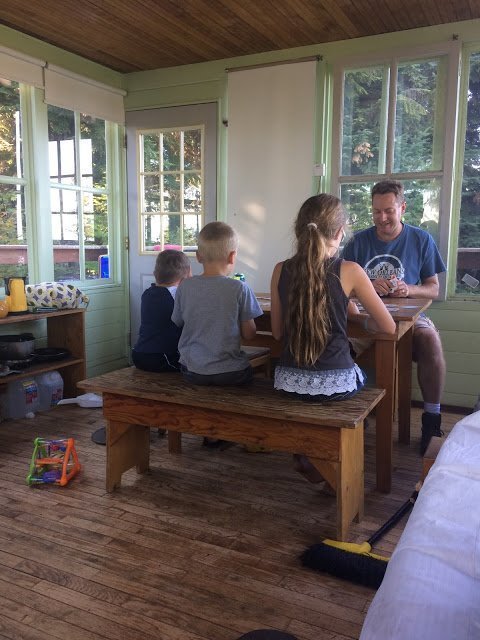 But toward evening, be sure to take a chair outside and watch the sun set.  The trees were somewhat in the way, but we were rewarded with wraparound color our first night. 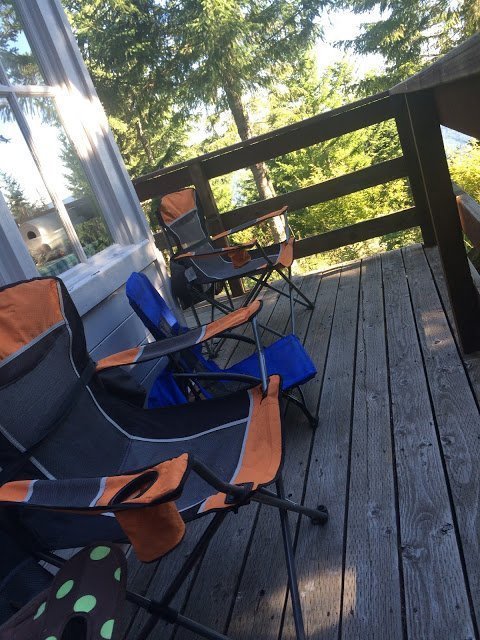 When you head for bed, don’t lower the shades.  For one, half of them don’t really work.  For another, the sunrise is so incredibly beautiful, you won’t want to miss it.  The guest book in the cabin suggested that the stars are also amazing, but during our stay we enjoyed a full moon and couldn’t really see the stars.  But the sunrise, oh my.  Our baby made sure I was up to witness it, and I wasn’t disappointed. 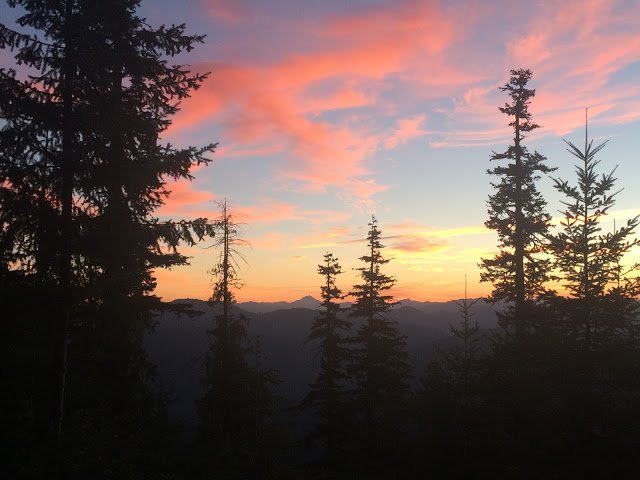 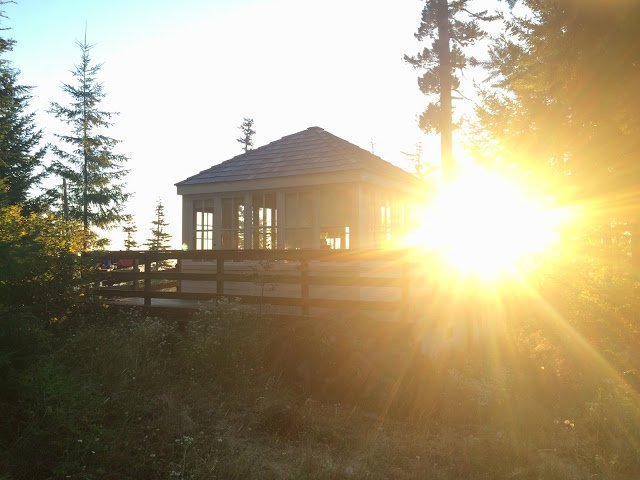 You may wonder what the mountains in the distance are.  Lucky you, someone has written the names of each peak on the deck railing.  There are about 6-7 peaks that are mostly visible from the cabin deck. 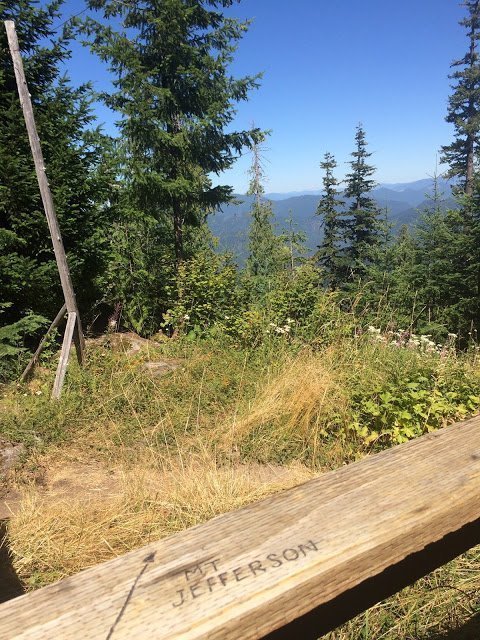 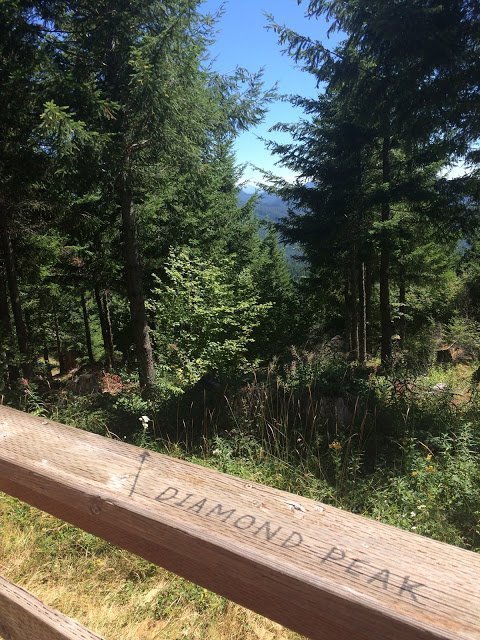 All in all, it was an amazing trip.  We only stayed for two nights, but they were utterly relaxing and peaceful, despite the treks down the hill to the bathroom.  I’d love to stay again, with or without our kids.  The kids had a blast, even our little ones.  The cabin was a safe place for them to play and there was just enough to occupy our older kids.  Cell service is actually possible at the cabin (we have AT&T), but only sporadically and only for phone calls.  I did manage an occasional, short text to my mom, but it wasn’t dependable.

What does a red line from a bee sting look like? Our story of allergy and infection.

Ape Cave and the Trail of Two Forests...

This looks NICE! We've stayed in several FS cabins, but no fire lookout yet. May have to keep this one in mind. By the way, we showed up at a cabin in Wyoming, lock combo in hand, only to find it didn't work, either! Talk about panic. Fortunately, there was a dude ranch not too far away; they fired up their satellite Internet connection and found an email from the local ranger, with the new combo, that he'd sent just in case anyone needed it. Apparently, they change the codes every few months, and I'd called to get the combo just before they changed it!

This looks NICE! We've stayed in several FS cabins, but no fire lookout yet. May have to keep this one in mind. By the way, we showed up at a cabin in Wyoming, lock combo in hand, only to find it didn't work, either! Talk about panic. Fortunately, there was a dude ranch not too far away; they fired up their satellite Internet connection and found an email from the local ranger, with the new combo, that he'd sent just in case anyone needed it. Apparently, they change the codes every few months, and I'd called to get the combo just before they changed it!

Thank you for your comment! Yes, I know that feeling of panic! Eek. We were MILES from the nearest cell service. Thankfully my husband thought that if we could get high enough, out of the trees, that maybe we'd catch a signal. He was right.

Thanks for such a detailed description! I was thinking about booking this for my birthday this September and was wondering if it actually sleeps 4 (like the FS reservation site says), just because I’ve only seen one bed in the photos? Thanks so much! Looks like you had an amazing time! 🙂

There is one queen size bed that sleeps 2. On our visit, they did not have cots for more bedding, but there was plenty of room on the floor for 2-3 more people. We brought in air mattresses for our kids to sleep on, then pushed the mattresses under the bed during the day . Feel free to ask any other questions. Waking up to the sunrise was incredible!