Oregon Sunstones – Collect your own legally and for free

Jewels litter the ground, glistening in the sunlight, sparkling into the distance as far as you can see.  Oregon Sunstones are Oregon’s state gemstone, and if you’re willing to drive (and drive and drive), they’re free for the taking.

In July 2013, our family traveled to the middle of nowhere to hunt for Oregon’s gemstone: the Oregon Sunstone.  We drove 7-8 hours from our home in the Willamette Valley with our 3 kids, ages 8, 3, and 4 months.  It was an epic trip, the first of its kind for our family. 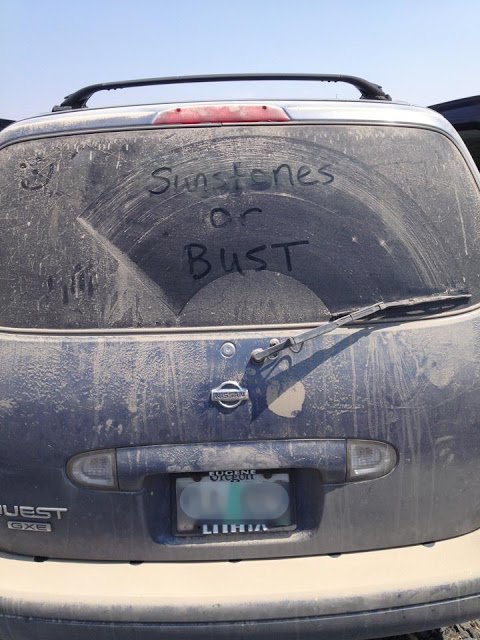 On the day we chose to hunt for sunstones, we slept in and ate a leisurely breakfast.  This was a mistake.  If you go, get up early and try to be there by 8 or 9 am.  The sunstones are in a very arid, shadeless desert and by the time we got there, it was HOT.  We ate lunch in the parking lot of the free collection area, managed by the Bureau of Land Management (BLM). They had several picnic tables, each covered with a shade awning.  There was a reasonably nice pit toilet available, too. 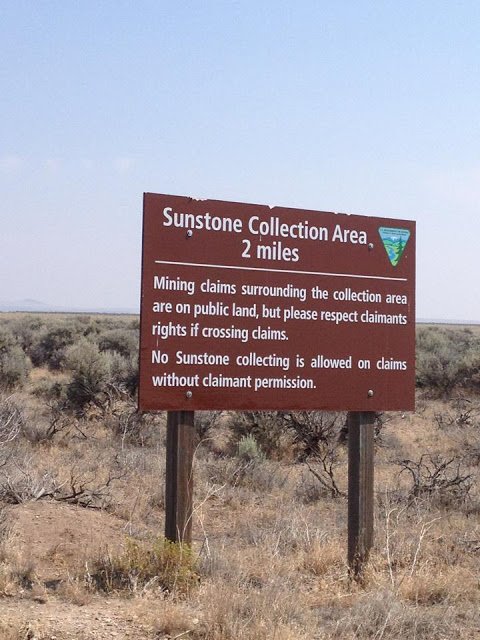 We weren’t sure where to go, so we chose one of the dirt roads leading off the parking lot.  The BLM collection area is large and there are several roads and trails to explore.  We’d heard the advice that generally, the less traveled the road, the better the collecting.  But we were eager and soon we pulled off to check out the area.

We took a shade awning for comfort; our 4 month old baby and I stayed underneath it, close to the car, so we’d stay cool.  My husband and our other two children fanned out to find “diamonds”.  I poked around under the sagebrush bushes close to me and found several largish pieces.

My husband had taken a shovel and small rock pickax, but he found pretty fast that digging doesn’t really help.  Either you’re in a good spot, or you’re not.  Sunstones littered the ground everywhere, it was easy to walk around and pick them up.  Some photos we’d found online showed bigger stones, or some with red color.  We didn’t find anything like that, but we also didn’t explore as much as we would have liked.  It was getting late by now, and we were over 20 miles from the nearest paved road.

After wandering around for a bit, we packed up and left to explore one of the nearby pay mines.  It was only a mile from the BLM site.  The Spectrum mine has a small gift shop and some examples of larger sunstones on display.  It was run by a man named Sasquatch and he patiently answered our many questions as we looked around.  They have a pretty decent rock shop with rocks and minerals for sale from all over the world.  There are several pay-to-dig mines in the area, but on our visit, the Spectrum mine was most developed.

A few months later, we found a local rock & gem shop, Five Elements, that would send our stones for faceting.  We took the whole bag of sunstones in with us and the owner helped us pick out the best, ironically (or not) the same ones I held in my hand in the above photo.  He sent them to Thailand for faceting.  After 6 months, almost to the day that we’d collected the gemstones, he called us.  Our faceted stones were in and we headed right down to pick them up. 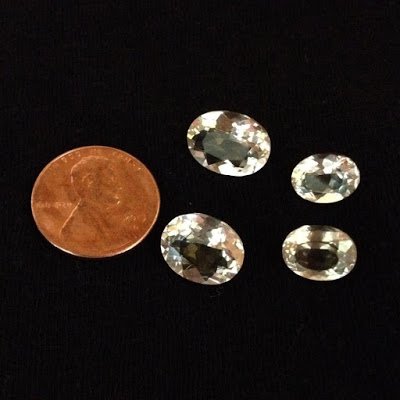 Three of the sunstones we collected became 4 faceted stones. They are incredibly sparkly with a vague tint of yellow.  I’d love to have them set into necklaces and earrings someday.

I’ve talked to so many parents who’ve heard about collecting Oregon sunstones, but didn’t think they could do it with young kids.  We did, and survived to tell the tale.  You can too!

Cost: free at the BLM site, no limits on what you gather as long as it’s for personal use only
Ages of our children:  8, 3, and 4 months
Other notes: no cell service, so let someone know where you’ll be.  We found that the pay mines usually have people there day and night.  Download the BLM brochure here.

Crack in the Ground hike delivers a deep...

What was the cost to have those 3 stones faceted including the postage?

What was the total cost?

Hi there! I don’t remember the exact cost, and this was in 2013, but I think it was around $100 for all of them. They took 3 raw stones and cut them into 4 faceted stones. It took about 6 months to send them out and get them back. He charged by the carat, and it was pretty reasonable compared to other quotes we’d gotten.

I love the Spectrum Mine! The folks out there are the kindest people who are always willing to help out!