Golden, Oregon, was a mining town in the 1890s, near the Coyote Creek in Oregon.  During its heyday, it boasted 150 residents, 2 churches, a mercantile and post office, and most notable, no saloons.  Within 20 years, the mine was tapped out and today, Golden, Oregon, is a ghost town.

During our recent trip to Wolf Creek Campground, we had plenty of time to explore a bit.  Just 3 miles away was Golden.  Our daughter has a bucket list of things to do before she’s 12 and visiting a ghost town is on it.  Clearly, we had no choice but to go check it out!

Golden, Oregon, is just a few minutes off I-5 and is a fun way to stretch your legs.  Golden is now maintained by Oregon State Parks and is open for anyone to visit.

Parts of the TV show “Bonanza” and several movies were filmed in Golden in the 1950s-1970s, so rumor has it that everything you see isn’t necessarily as old as it looks.  But even if it’s not 100% authentic, it’s an adventure and it’s listed as a Heritage Site. 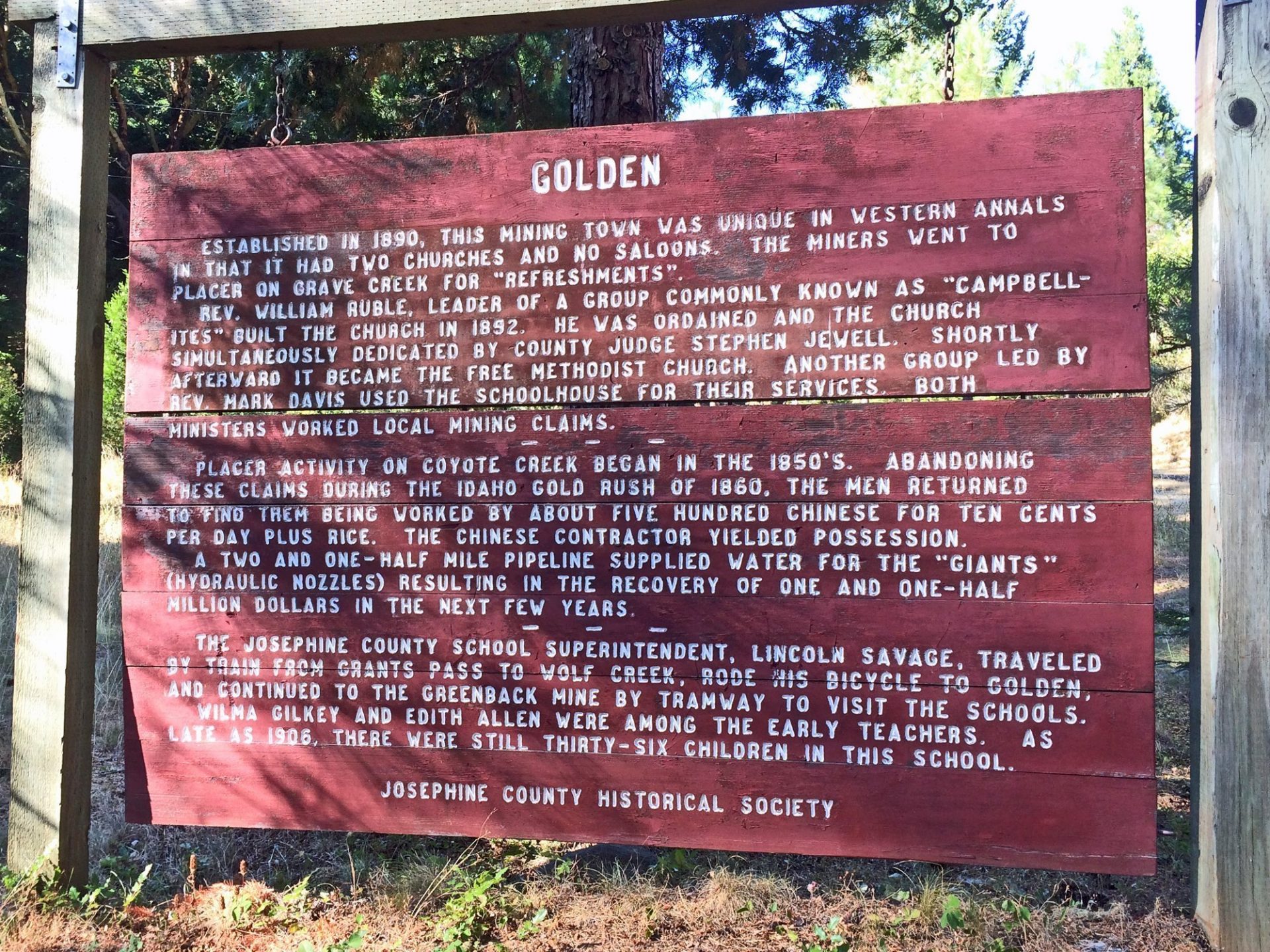 There’s a wide spot in the road for parking.  One interpretive sign stands amidst the remaining buildings, inviting visitors to learn more.  When we arrived, we all jumped out of the van and fanned out to explore.  No one was around, except for some free-ranging chickens.  We had the place to ourselves. 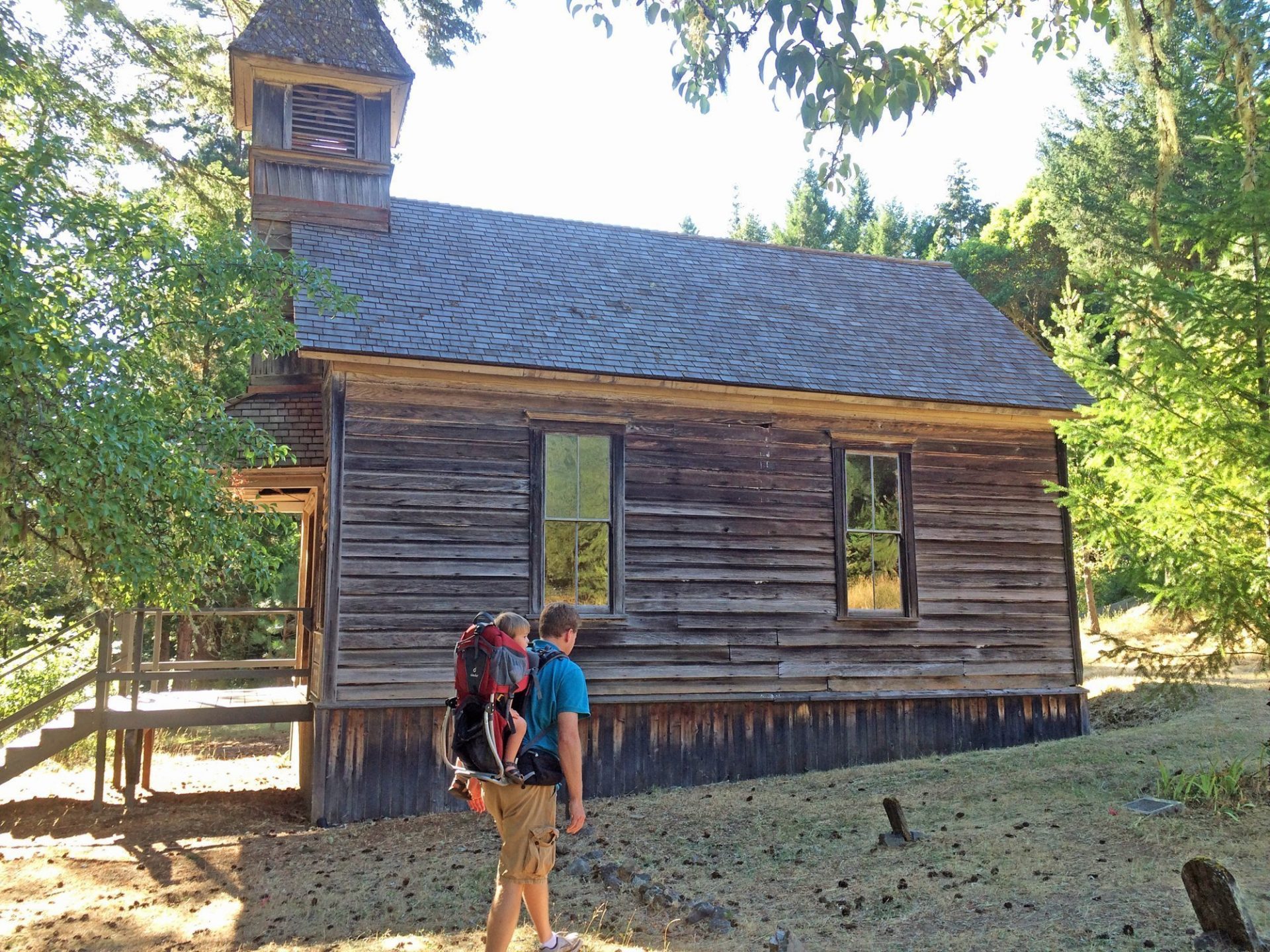 The first thing we saw, besides the interpretive sign, was this gorgeous old church. Originally built in the 1890s, and rebuilt in the 1950s, it’s now part of the historical site and probably supposed to be locked. 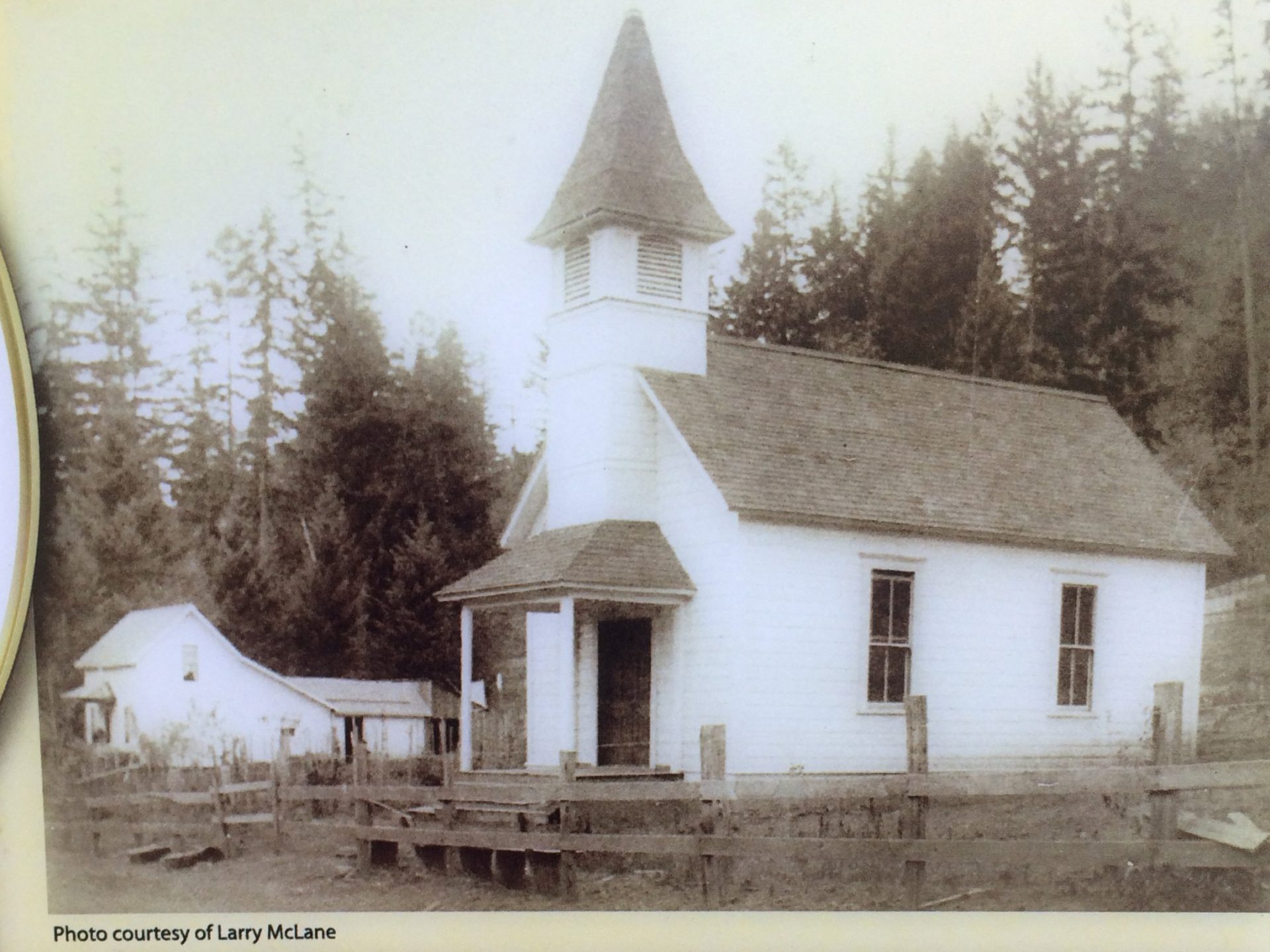 “As more families arrived, Bill, Schuyler, and Grandpa Ruble built Golden’s church, and only then built the family home. The Ruble priorities were clear: faith and family come first. As long as the Rubles lived here, Golden had no saloons. If you wanted to ‘tip a few’, you had to walk over the hill to Placer.” ~From the interpretive sign, the caption below this photo. 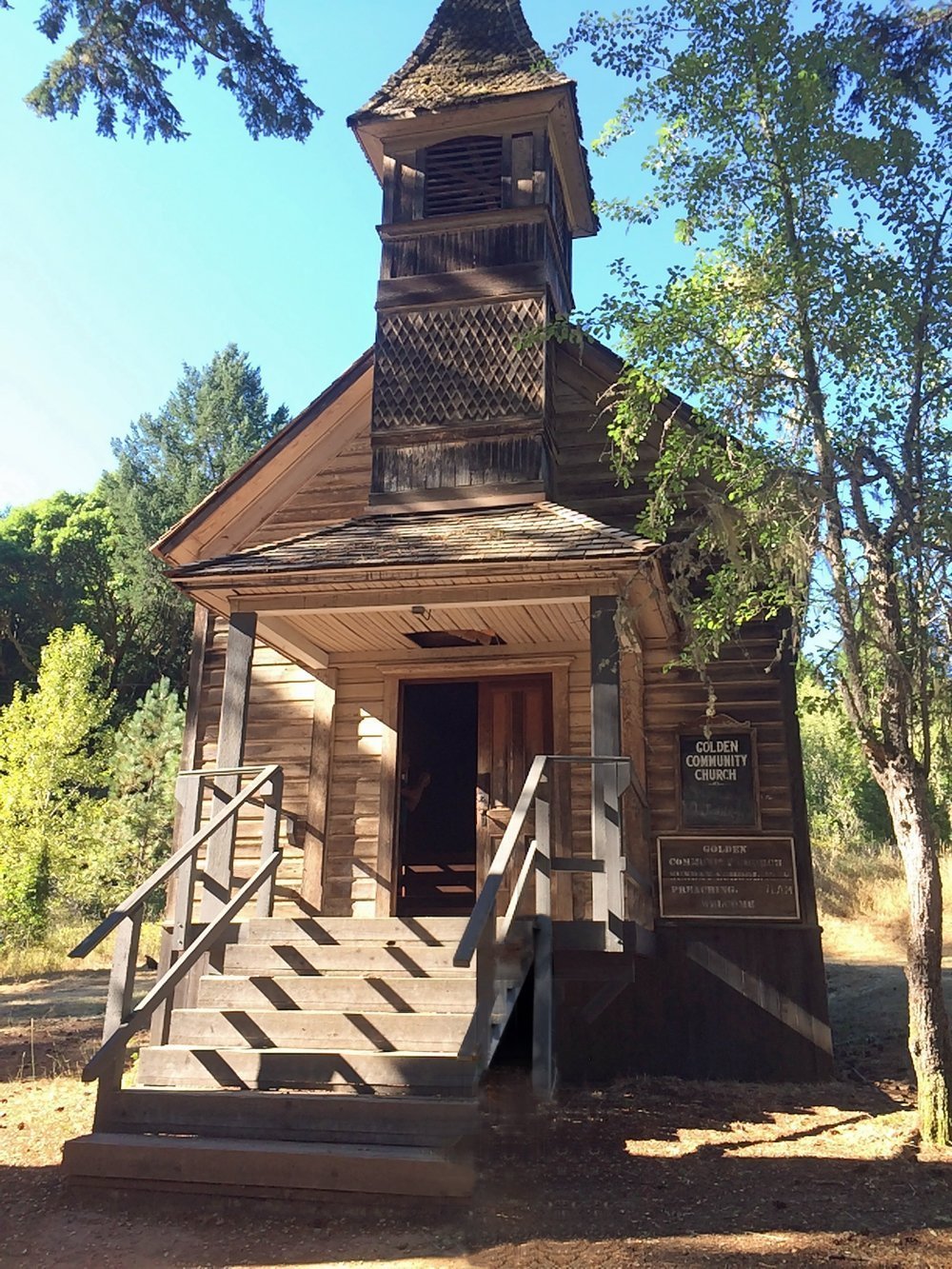 You may notice some odd blurring at the end of the steps. I promise, despite a recent Ghost Adventures episode, this isn’t a ghostly spirit. My son was in the photo and I’ve removed him with my admittedly poor Photoshop skills. And in the doorway, if you see a faint image of a person, this isn’t a ghost either (I know you’re looking…I keep receiving emails!) That is my husband taking video inside the church. While we were there, it was very peaceful and quiet. No ghostly activity! 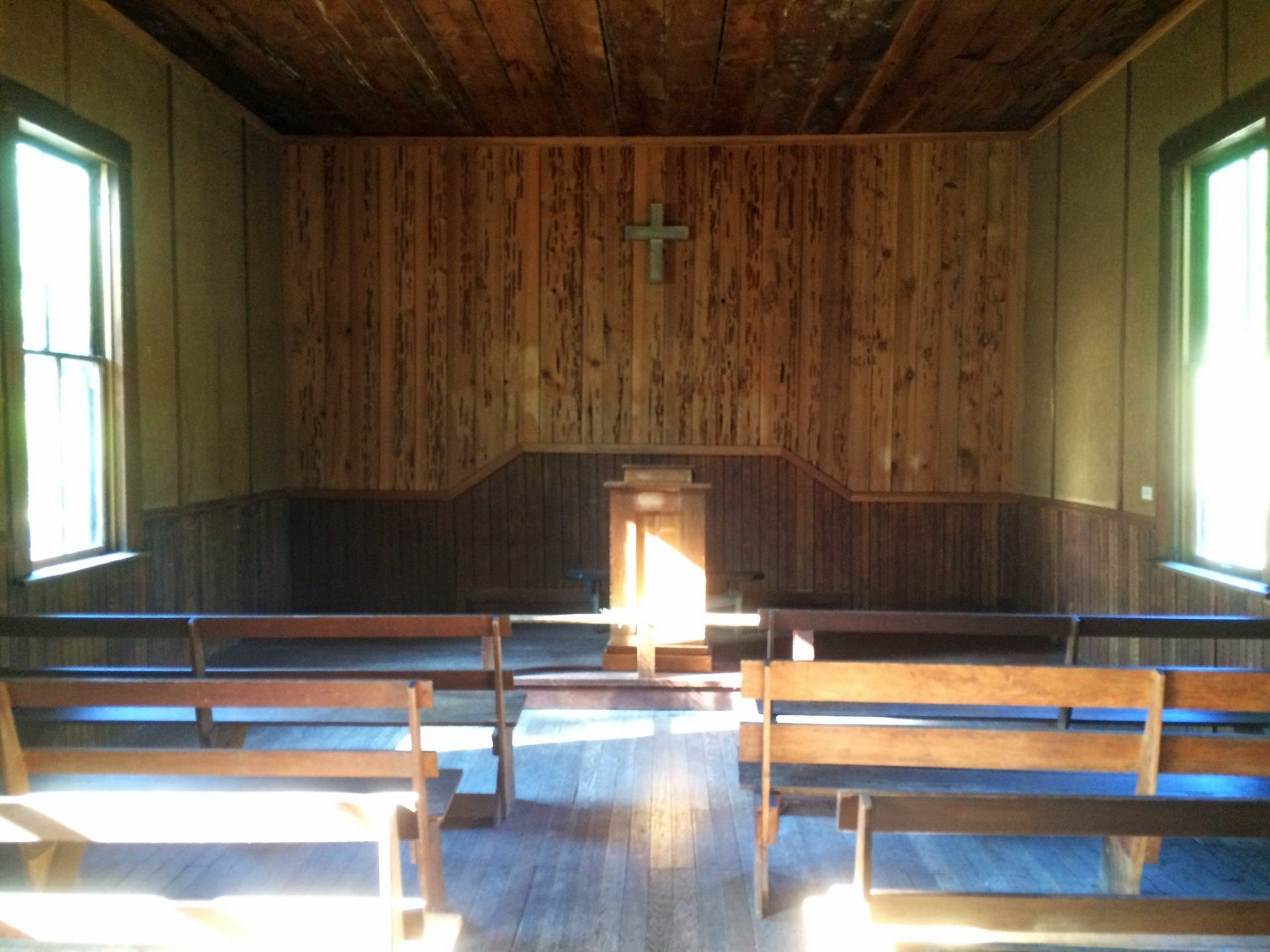 There were electric lights, and you can see the white wall outlet on the right.  I’m assuming, since this church was rebuilt in 1950, that electricity was added at that time. But there were also telltale signs of history…there remains a hole in the ceiling for a stovepipe and a broad square on the floor where an old wood stove must have been to warm churchgoers on cold winter days.

Near the church is the mercantile and post office building.  The main part of the building was the store and post office, and the smaller addition on the left was apparently living quarters for the shopkeeper. 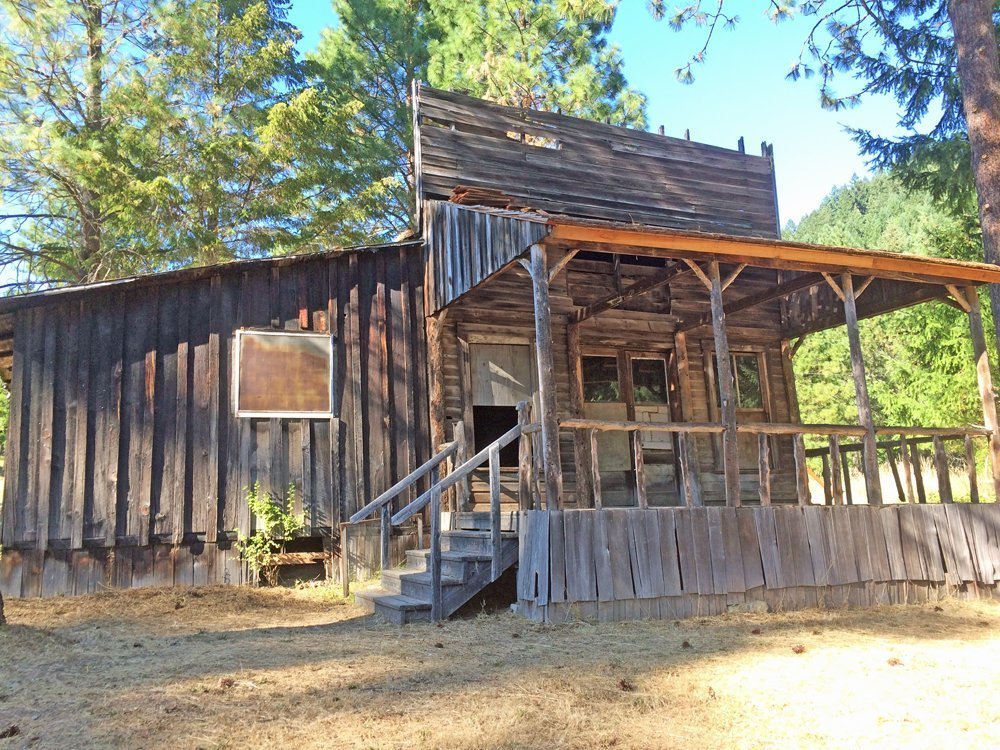 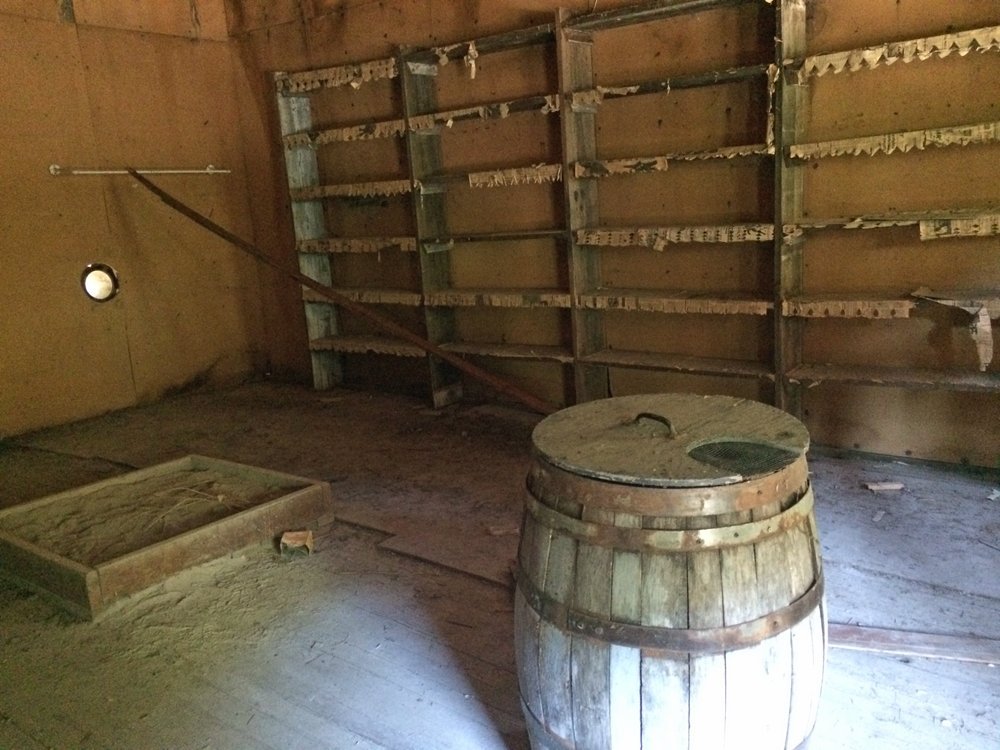 Inside the main room of the mercantile. I was excited to see what dates were on the newspapers lining the shelves…1993…I have no idea what someone was decorating for, but they worked hard because all the shelves were covered and the newspapers were all cut in a lace pattern. 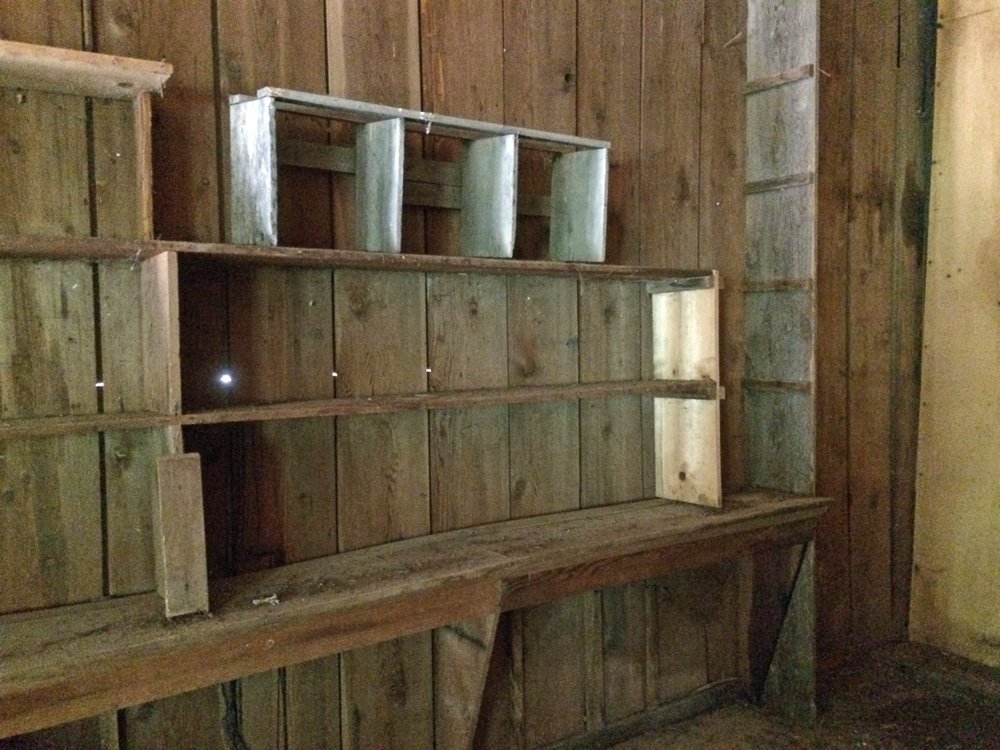 The wall opposite the shelves in the main room of the mercantile. 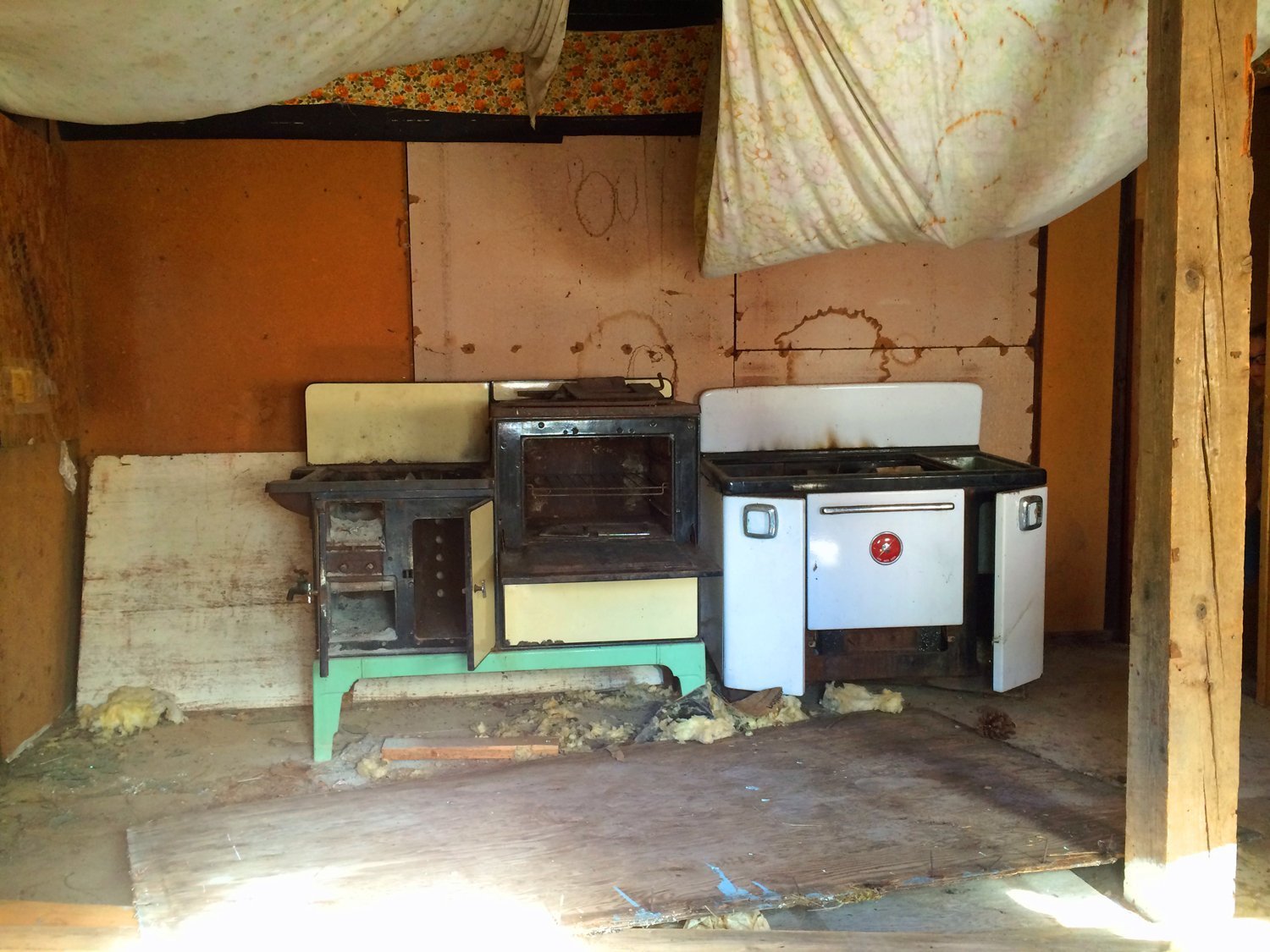 Living quarters. I don’t know how much of this is authentic or possibly from the Bonanza filming.

A bit beyond the mercantile is a white school building.  As late as 1906, they still had 36 children enrolled here. 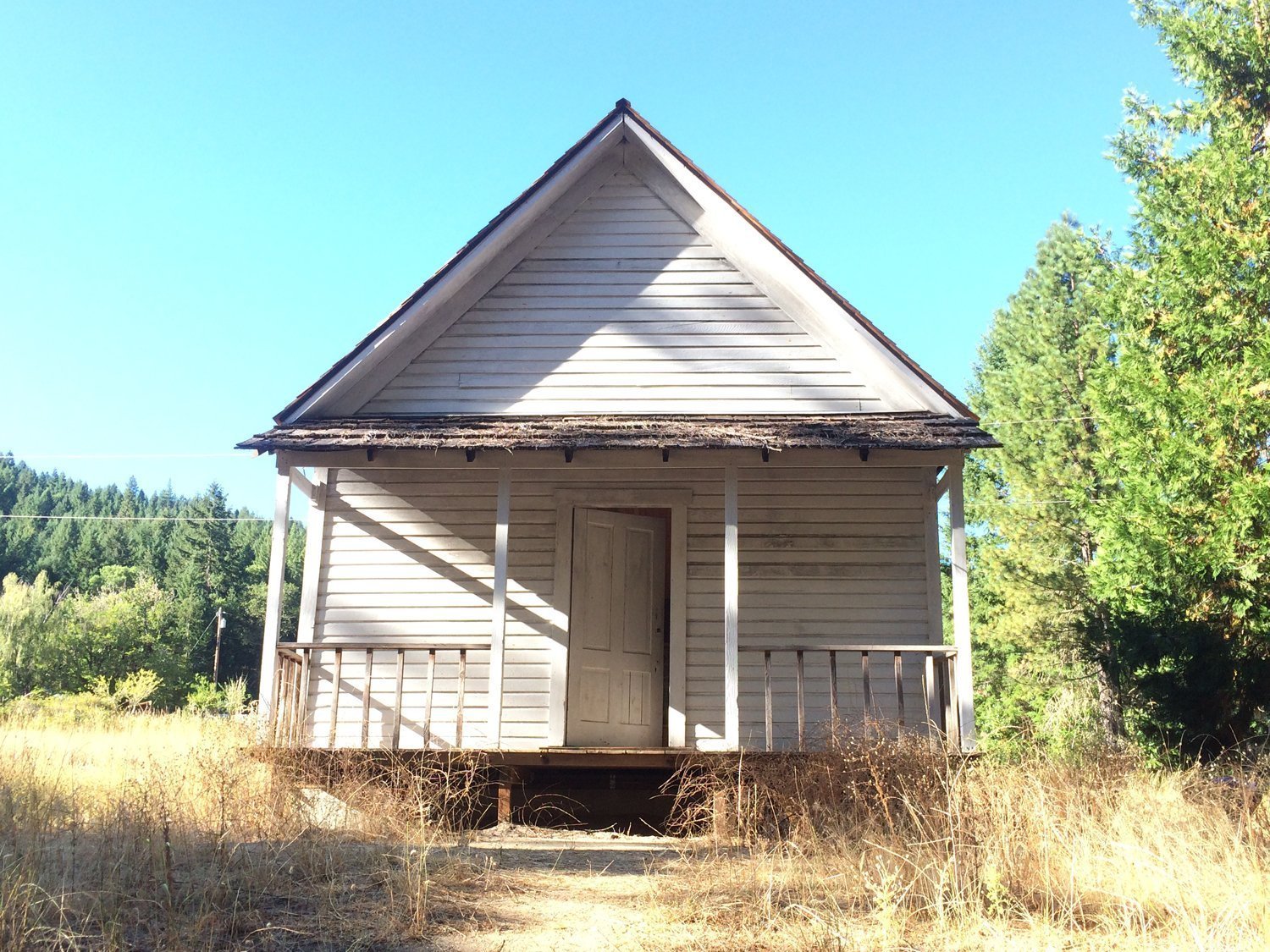 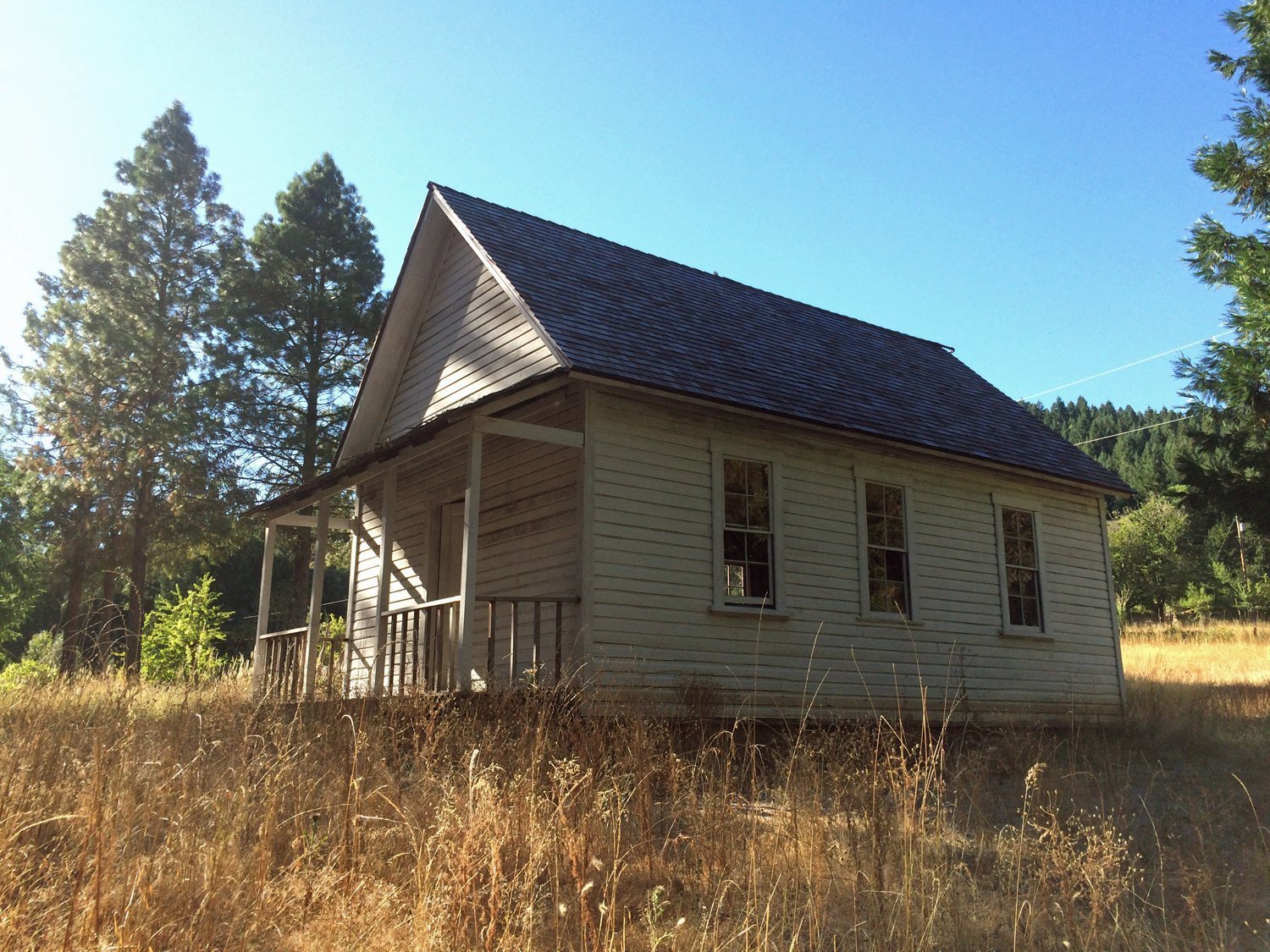 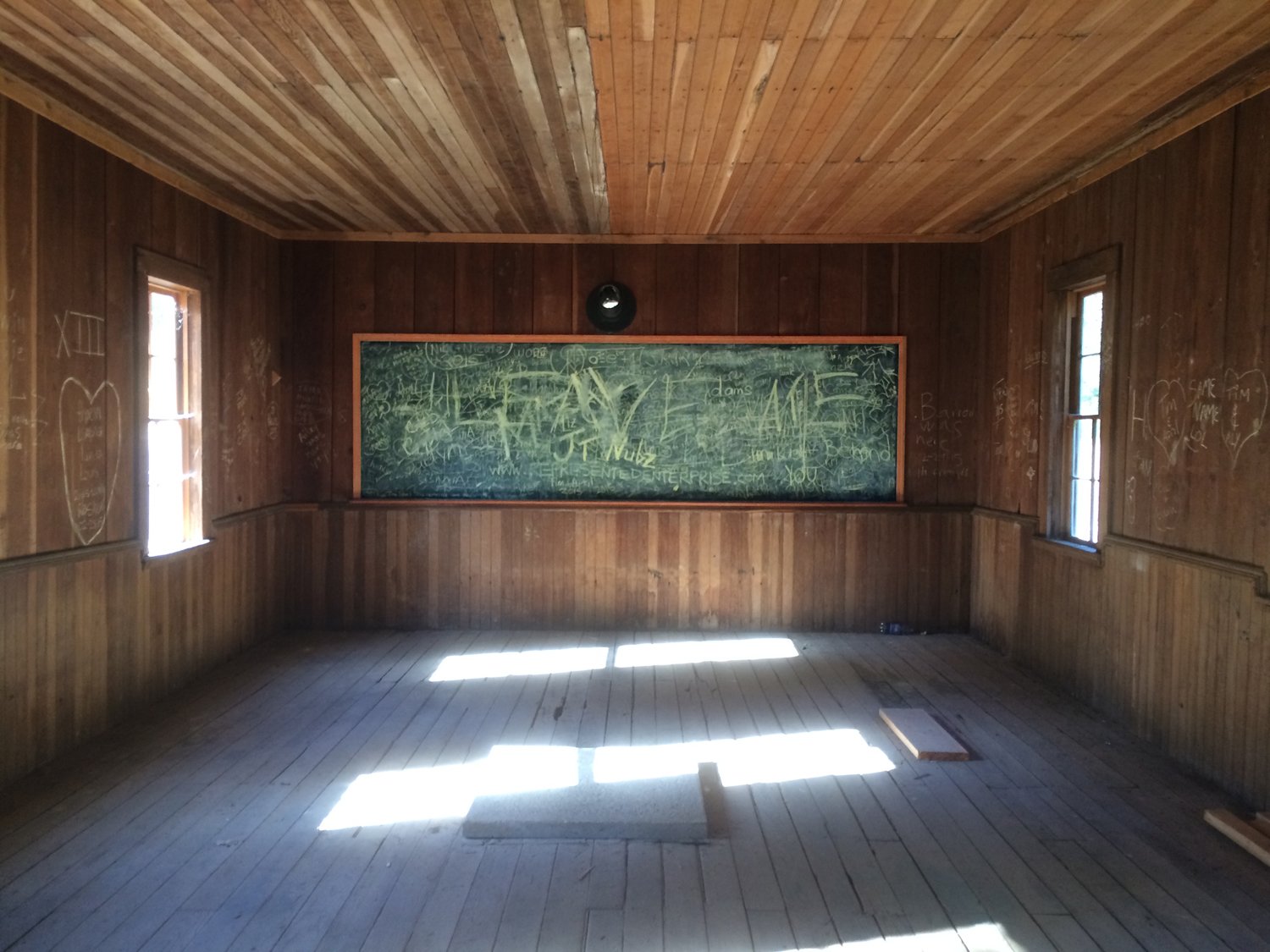 Inside the school at Golden. 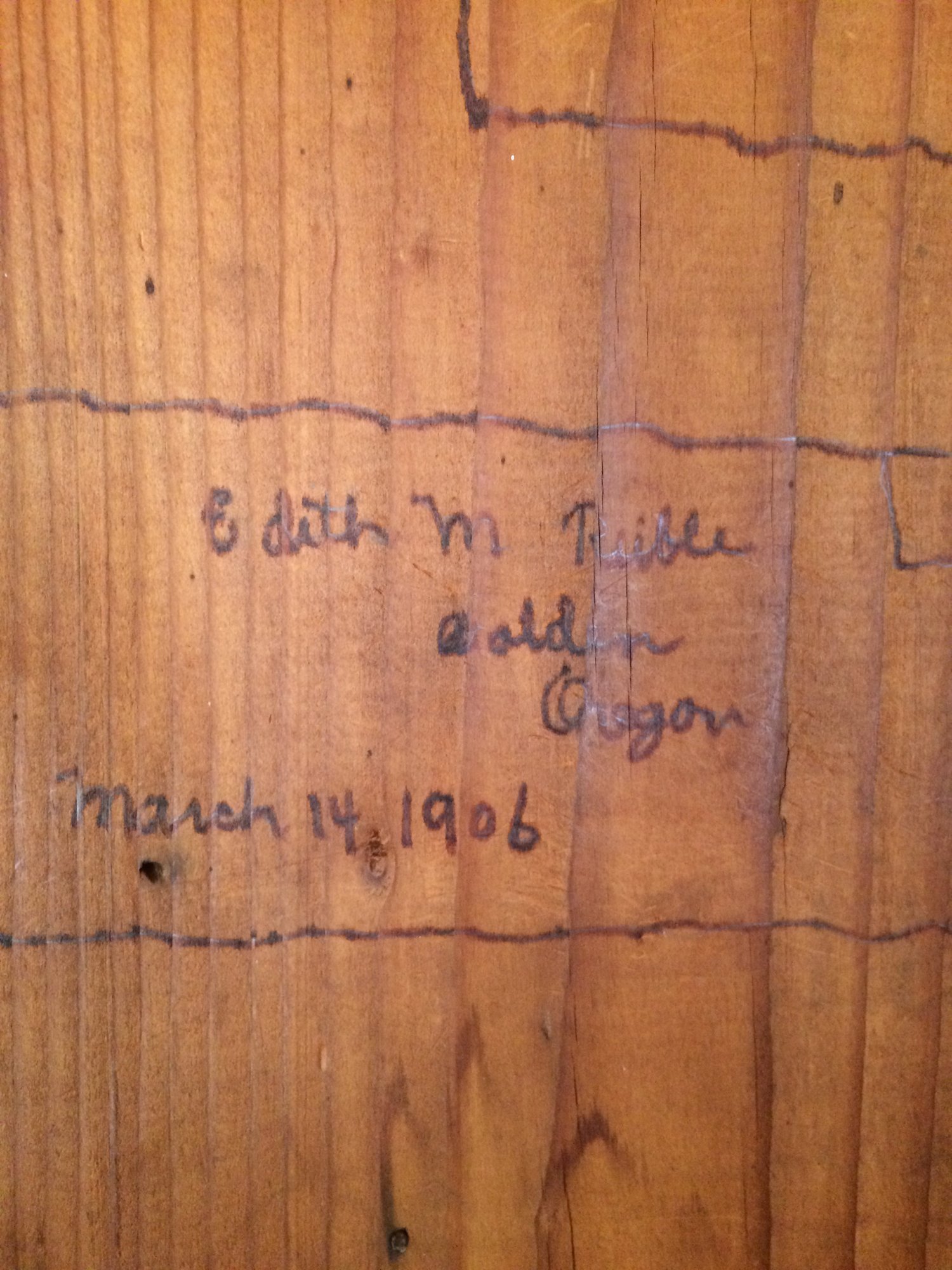 Names scrawled under the coat hooks, written in pencil and eventually traced over with sharpie. At any rate, notice the “Ruble” name…one of the town founder’s children. 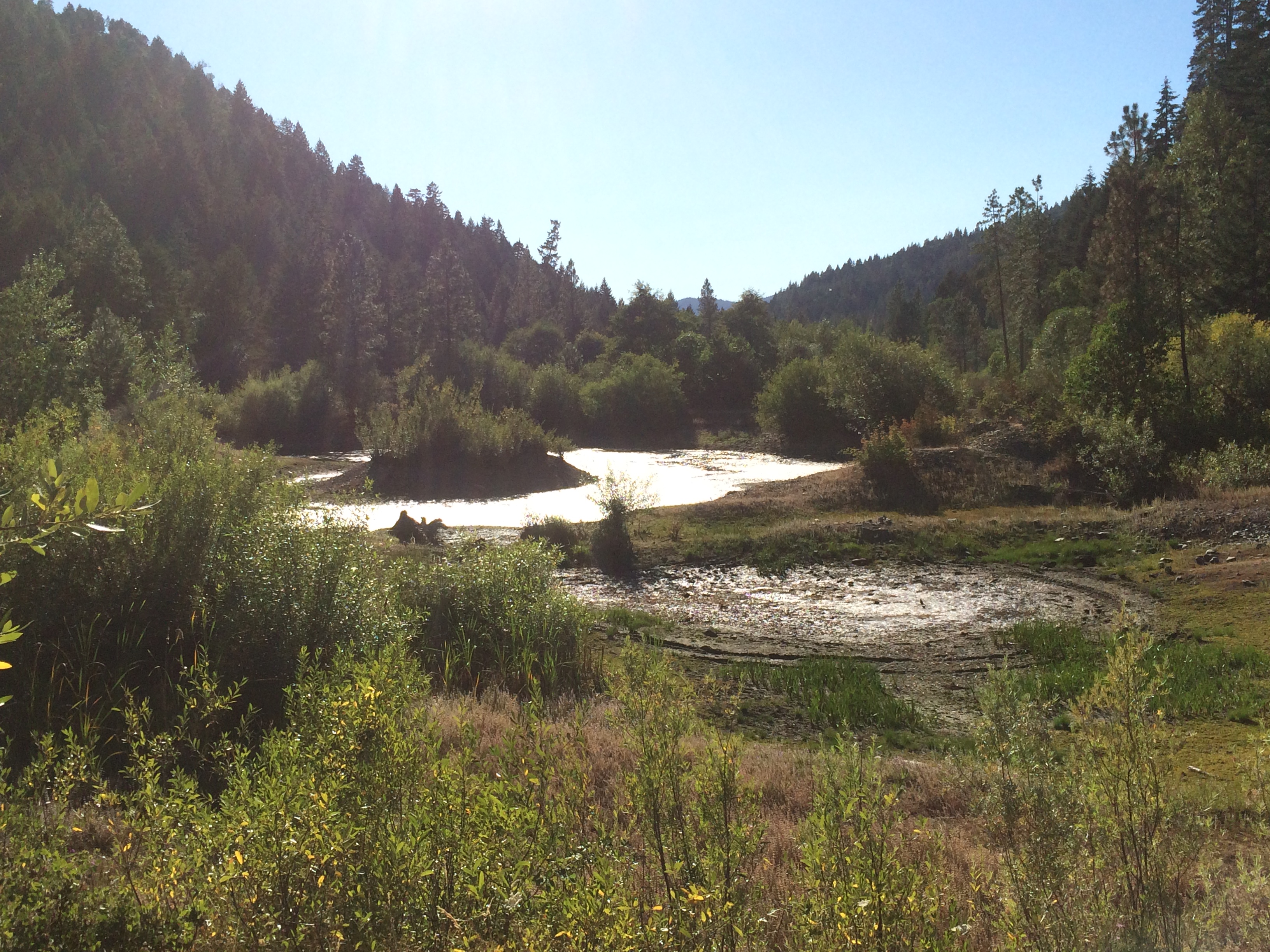 Visit the Leaburg Fish Hatchery with kids of...

I am in Florida. Family in Oregon. I lived in Oregon for 11.5 years but raising two very active children in sports left little big travel time. Now I want to start road trips to see the history of the great North west.. I love all the views posted… Thank you..

Today, I just heard of Golden, and thought to do a search about it. Glad I came across your page – It’s fantastic. Thank you.

It’s a lovely little spot to visit. And there are chickens!